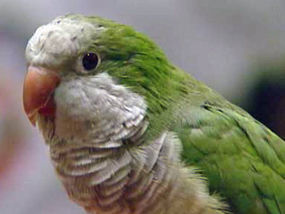 A Quaker parrot named Willie alerted a babysitter that an infant was choking by repeatedly squawking “Mama, Baby!”.

Megan Howard was babysitting an infant and had brought her pet parrot with her on the job. When Howard left the room once, the baby started choking on her breakfast. Willie started calling for help and flapping his wings. When Howard returned to the room, baby Hannah had already turned blue from lack of oxygen.

Howard admininstered the Heimlich maneuver and the child was able to resume breathing. The baby’s mother, Samantha Kuusk recounted, “The part where she turned blue is always when my heart drops no matter how many times I’ve heard it”. Recently, Willie was honored for his life-saving efforts by a Denver Red Cross chapter with an Animal LifeSaver Award. Willie was given his due at an event attended by the governor of Colorado.

Quaker parrots live about 20 to 30 years and are also found in the natural environment, in the East and the South. They are known for their intelligence, and lively expressiveness.