Silent Spring by Rachel Carlson (1962) is a particularly relevant book for environmentalists everywhere. Understood to have played a big role in starting the environmental movement, it helped to increase consciousness of the need for sustainable, healthy, and regulated farming practices. Rachel Carson created the book with the credentials of being a known author and having been a former marine biologist with the U.S. Fish and Wildlife Service. 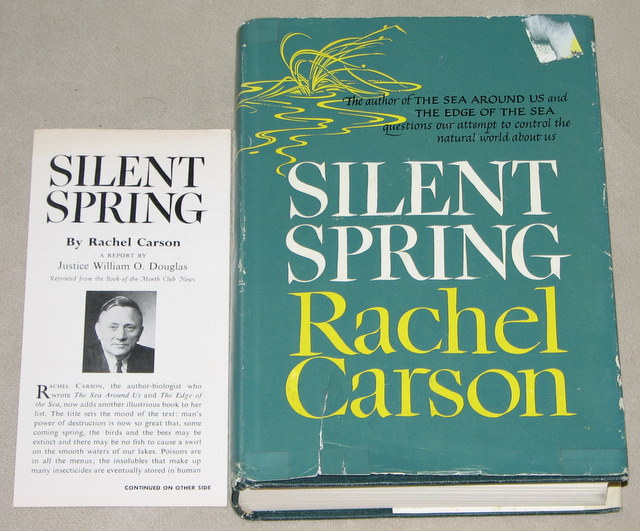 Carson is concerned with the effect of pesticides on the environment, and especially on the people who consume the pesticide-coated fruits and vegetables or pesticide-affected meats. She describes at length how DDT can accumulate in the fat of humans and animals, and explains data that shows a large rise in cancer rates. Carson links these together, explaining how pesticides can be toxic to the environment in both long and short timescales.

This book was written in an era when pesticides were used with relative abandon: sprayed over entire fields of crops, and anything nearby. Something had to be done, she believed, especially since pesticides that were used decades before could still be found in the human body and in the environment. She described a phenomenon where the concentration of pesticides increases dramatically while it runs through the food chain, and she explained how many pesticides are stored in the fat of the human body. One less well-known problem this can cause is when an individual loses weight, the pesticides are released all at once, and can poison or kill the person in question.

The book was written in a comfortable conversational tone so it would be easily accessible by those without Carson’s history and education. She has a notably beautiful way with words, especially in her chapter “A Fable for Tomorrow.” That particular chapter is written like a novel, capturing readers with its chillingly gruesome painting of a little town with no children, no birds singing from the trees and dead, browned plants.

The chapter was created by combining the effects of pesticides on many towns all together into one little town, which is a reality that Carson did not believe was far off at the time. If the misuse of pesticides continued at the level she had seen it at, she expected many ecosystems would collapse and many people would develop cancers, become poisoned, or die. Dangerous pesticides that could kill if even three drops fell on the skin of a child were sold in the supermarkets on the shelves for home use.

As Carson’s book became more popular, pesticide-producing corporations became furious and spread propaganda depicting nature as uncontrollable and on the attack. Carson was depicted as an unprofessional, unintelligent, crazy woman who was trying to stir up trouble. Worlds were described wherein parasites, pests, and diseases had taken over the world and sent everyone spiraling back to the Dark Ages.

It’s important to understand that Carson didn’t believe in removing pesticides entirely from use, which is a severe over-generalization of her stance. She believed that pesticides should be used when absolutely necessary, but that they weren’t the most effective way to control pests. Instead of using chemicals that can severely harm the applicants and the animals the applicants would be eating, Carson saw more logic in using the natural environment to her advantage in controlling pests, which she referred to as a “biotic” approach.

Introducing more of a local species in an area can drastically reduce pests on crops, such as introducing a fungus that destroys Japanese beetles into an area to selectively control the population of Japanese beetles. Growing crops in alteration with other crops can also help, as many pests are spread from plant to plant easily because there is nothing else in the way that they would not want to eat.

Carson had expected a knee-jerk reaction and had had many experts approve her manuscript prior to its publication. Because of the reactions of pesticide-manufacturing companies, it’s obvious that this was a good move. President John F. Kennedy was inspired to have the President’s Science Advisory Committee examine the book’s stance, and when it was accorded approval, DDT was brought under tight regulations and eventually banned. Carson helped the world become aware that their technology had surpassed nature’s ability to heal itself from its effects.

Have you read Silent Spring? I’m interested to hear other opinions on how this book has affected people, or moved them towards living a greener lifestyle. Leave a comment below to join the discussion!