It is difficult to comprehend just how rich the plutocracy in the United States has now become. The distribution of wealth and resources in this nation is even more extreme and inequitable than what we are all earning for our wages (if you are fortunate enough to actually even have a job). According to new research released by the Economic Policy Institute,”The State of Working America’s Wealth“, the volatility and turmoil in our economy continues to increase, as the massive chasm between the grotesquely rich and everyone else grows even more immense. 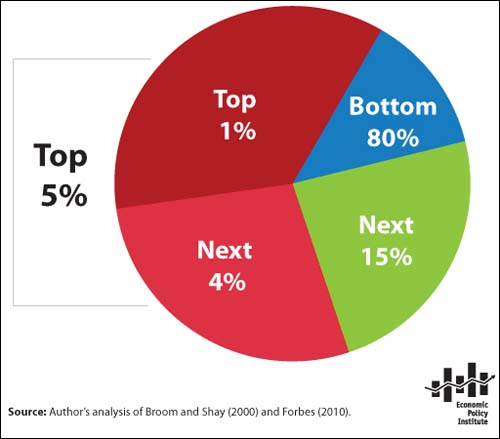 The institute’s research shows that the wealthiest 5% in this country control a whopping 63.5% of everything, while the rest of us, the bottom 80%, own just 12.8% of the country’s wealth. Wealth was defined as a family’s total assets:

“…such as bank account balances, savings, and real estate, minus total liabilities, such as mortgages, credit card and other debt, and outstanding medical bills. Wages and income are important measures of economic well-being, but wealth offers another valuable perspective on families’ financial security and ability to withstand job losses or other economic setbacks. ‘The State of Working America’s Wealth’ notes that these large disparities in wealth explain, in part, why the economic recovery feels different to different people: Typical families and workers continue to struggle against high rates of unemployment, stagnating wages, and foreclosure, while the wealthy have enjoyed significant gains in the stock market, and benefited from corporate profits.”

Keep in mind that this enormous redistribution of wealth is all happening, in large part, thanks to Bush’s radical changes to our country’s tax policies. His huge tax cuts for the wealthy have fueled these unsustainable income shifts, and they have also added more to our nation’s deficit than all of our illegal wars combined.

The greater the disparity in wealth between the very rich and everyone else, the more unstable an economy becomes. Our nation has now created a larger gap in the distribution of wealth than the massive chasm that helped fuel the Great Depression. In 1928, one year before that global economic collapse, the wealthiest .001% of the U.S. population owned 892 times more than 90% of the nation’s citizens. Today, the top .001% of the U.S. population owns over a thousand times more than the entire bottom 90% of us. This is not sustainable, and makes for a very volatile economy. It would appear that the American empire is about to crash.