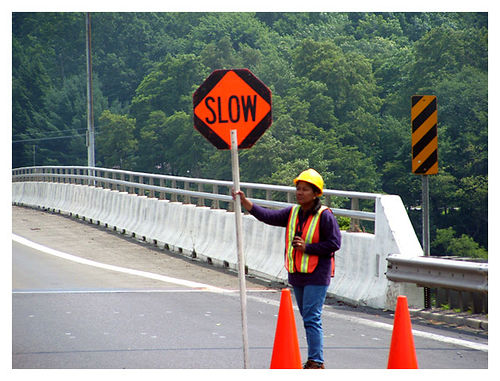 In 2009, the U.S. government launched an economic stimulus and allocated $26.6 billion in infrastructure funds to state budgets  with the goal of creating jobs. In February 2011, Smart Growth America (SGA) released a report analyzing the effects of the program after two years. They found that states who used the funds to repair roads and bridges and invested in public transportation projects created the most jobs. States who primarily used the funds to build new roads fell to the bottom of the rankings for job creation.

The funds were divided the following way:

Repair projects create 16 percent more jobs per dollar than new road construction. The projects spend less on land, more on wages, employ more different types of workers, and are bogged down less with plans and permits.

The states that spent all their money on road and bridge repair created the most jobs, while Texas, Kentucky, Florida, Kansas, and Arkansas created the fewest by spending their funds on new roads.

After learning these lessons from these first two years, SGA recommends that states spend their money fixing existing roads and bridges and investing in public transportation more in the future. A poll SGA conducted in November showed that 91% of respondents indicated that repairing roads should be a high priority and 68% voted for public transportation projects to be a high priority. Seems that the public support this recommendation as well.