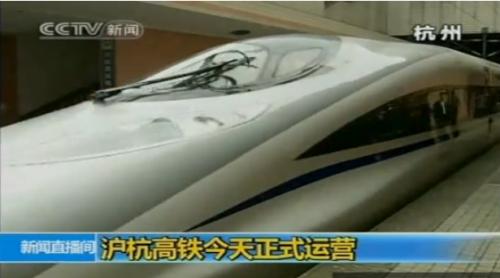 China's fastest train in operation, screenshot of video below.

I just wrote on the high-speed rail (HSR) network being planned in California earlier today, which will have trains that can travel up to 220 mph (354 kph), bringing people from LA to San Francisco in less than 2.5 hours.

While California is planning its network, however, China has already started implementing one, the largest HSR network in the world. It is actually more than halfway done and is now looking to connect it’s HSR network to Europe.

Last week, China “officially opened a 220-km high-speed railway line between Shanghai and Hangzhou.” This line has trains running over 350 kph (or about 220 mph). In tests, some trains actually traveled over 400 kph (249 mph), setting a new world record. The total length of China’s rail network is now 7431 kilometers (4617 miles), the longest in the world, and by 2020 it is expected to serve 90% of the country’s population.