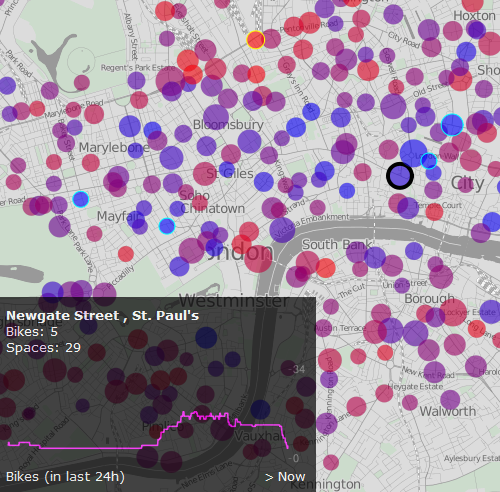 London is one of the latest big cities to implement a modern bike sharing program. The “cycle scheme” (as they call it in England) is popularly called “Boris Bikes” now, named after London Mayor Boris Johnson. To help show the effect of this program, Oliver O’Brien of the Centre for Advanced Spatial Analysis at University College in London is plotting use of the London cycle scheme in real time on a computer and then creating 24 second=24 hour maps to show people how the cycle scheme is being utilized.

As Richard Peace of BikeRadar reports: “Full docking stations are shown in red with a yellow circle around them, whilst nearly full are red with a sliding scale down through purple to blue with a blue outline – the latter being totally empty.”

Patterns are as you would expect — the cycle scheme is used most heavily during rush hour, the least in rainy weather and on weekends, and the center of the city is full of bikes in the daytime and relatively empty in the evenings (visa versa for the edges of the cycle scheme area).

Peace also notes that the cycle scheme has, clearly, been adopted positively by London’s residents:

Despite initial teething troubles the hire scheme appears to have been readily accepted and heavily used. You can tell the British have taken an idea to heart when it gets a popular nickname – the hire scheme steeds having quickly become known as Boris Bikes. There is even a popular and eponymous online forum.

For a little more on how the program works, watch this amateur video shot from a mobile phone:

Or, want to see Mayor Boris Johnson, himself, on a one of the cycle scheme bikes? Here’s a video on that:

Great-looking cycle scheme in London, and fun stuff happening around it.

Are you super into bicycles and bicycling? Consider joining the Biking Revolution of Love & Freedom facebook group.

Photo Credit: Screenshot of the top video via Oliver O’Brien