Who Owns the Rain? 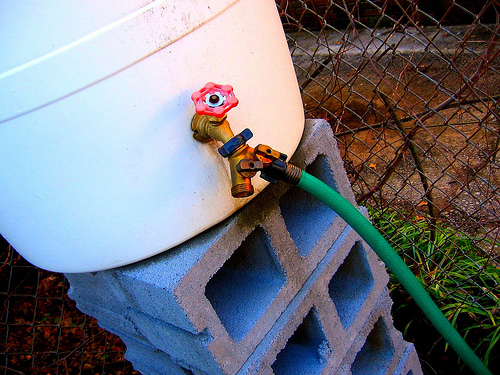 A rain barrel or two may seem like the perfect solution for watering the garden without waste and without adding to your water bill. Before you build your rainwater harvesting system, though, you might want to make sure that it’s legal to do so. There are three states that say the water that falls from the sky belongs to them, not to just anyone.

Homeowners who want to use rainwater in Utah have to purchase a water right through the state, but Utah Senator Scott Jenkins wants to change all that. He’s planning to sponsor a bill that would allow residents to collect up to 2500 gallons of water in their home systems. I wasn’t able to find any stories about this that were more current than December. Anyone from Utah want to give us an update on how the bill is progressing?

As in the other two states where rainbarrels are against the law, the Utah law is rarely enforced.

Rainbarrels are illegal in Colorado. From the EPA handbook on rainwater harvesting:

Colorado law, for instance has assumed that all rainfall eventually reaches groundwater or surface waters and is therefore appropriated. In the dry regions of the state, however, a study has found that the majority of rainfall on undeveloped lands is lost to evaporation and transpiration and only a small fraction actually reaches surface waters. [emphasis mine]

The law is a pretty vague as far as penalties, and the state rarely enforces it. The Colorado water laws strikes me as especially fishy, because they seem to love giving water away for free to private interests. According to the Wall Street Journal, this includes:

oil companies, ski resorts, fire districts and breweries. The international food conglomerate Nestlé has applied for a permit to draw water from a Colorado aquifer and sell it in plastic bottles under its Arrowhead brand.

Yet it’s technically illegal for state residents to collect a barrel or two to water their gardens! State Representative Marsha Looper is working on a couple of bills that would allow some folks in Colorado to harvest rainwater. Even if both bills pass, though, most residents would still be breaking the law by setting up a simple rainbarrel.

The City of Seattle, however, obtained a citywide water-right permit to ensure the legality of water harvesting efforts.

The state’s Department of Ecology claims the reasoning behind this is that catching the water before it hits the ground robs water rights holders. They call it “impairment.” The Department of Ecology does clarify that “a traditional residential rain barrel” is legal in the state of Washington, but larger cisterns require a special permit.