Endangered Sea Turtles Fight Back from the Brink of Extinction 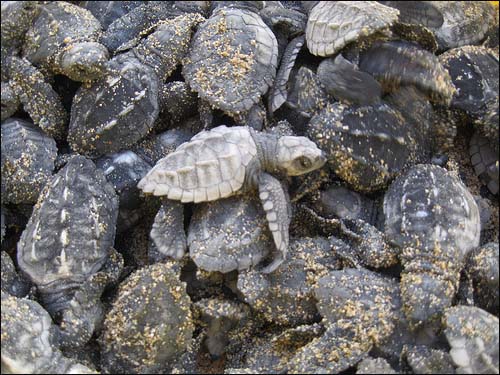 Even though sea turtles are legally protected, their populations have been drastically dwindling worldwide. All marine turtle species are listed as endangered, except the Loggerhead, which is listed as threatened. Sea turtles face a number of deadly threats, including poaching, fishing, rapidly shrinking habitat, human encroachment, polluted oceans and global warming. However, in San Francisco, Nayarit the turtles are beginning to make a slow resurgence. 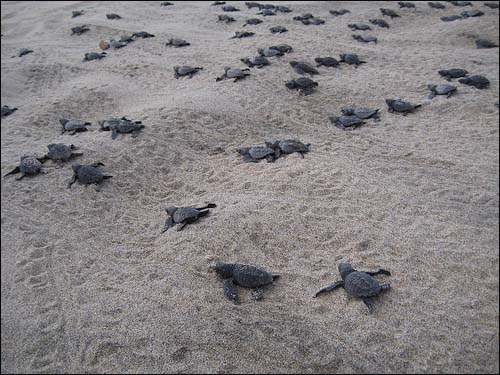 For the last 17 years on the Nayarit coast of Mexico a non-profit organization, Grupo Ecológico de la Costa Verde, has been helping to increase the population of sea turtles in the region. Frank Smith is the Director of this marine turtle protection and environmental education program that is based in San Francisco (also known as San Pancho). He explained:

“We keep very accurate records of how many nests there are every year. In 1992 there were fewer than a hundred nests, now we have found more than 1060 marine turtle nests with a total of 100,000 eggs laid every season.” 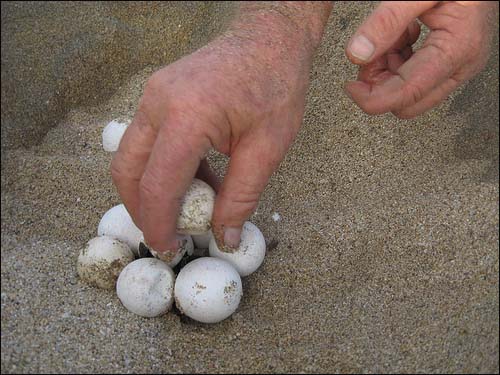 Each day during nesting season Frank and other volunteers find newly laid marine turtles nests and transfer them to the controlled environment of protected nurseries. They are guarded from predators, pests and poachers, giving them a much better chance of survival. During the height of nesting season, roughly July to November, the eggs take 45 days to hatch; at this time of year, in February, they take about 60 days. Frank explained:

“Most of these turtles are Olive Ridleys; occasionally we have a few Leatherback Turtles as well, When fully grown the Olive Ridley Turtles, also known as the Pacific Ridley,  will be 20 inches wide and over two feet long. There are only a few beaches where marine turtles will lay their eggs, and this is one of them.”

I asked Frank what criteria the turtles use to choose an ideal nesting spot, and why do they choose this particular beach; he answered:

“Only the turtle knows.”

Frank Smith first came to San Francisco Mexico in 1991 to visit  friends. They told him about the problems that the local population of marine turtles were having. Although marine turtles are legally protected in Mexico, in 1991 95% of all of the marine turtles in San Pancho were being taken for food or to be sold, and they were rapidly becoming extinct in this area. After he retired from his job with the U.S. Forest Service, Frank left his home in Idyllwild, California and came back to Mexico the following nesting season to help the plight of the sea turtles.

After the 11th year of their work Grupo Ecológico saw a spike in the number of turtle nests. It takes marine turtles hatchlings 11-16 years to reach reproductive age. Female marine turtles will then return to the group of beaches where they were first hatched to lay their eggs. Frank told me that, even though the nests are screened, a few of the hatchlings in the beach nursery had been killed by fly larvae; though over two hundred were successfully hatched on the day that I was there.

“Only one in 177 of them will ever reach adulthood. We give them about two hours to warm up and then release them near the sea at sunset; this helps them with their strength and improves their chance of survival.” 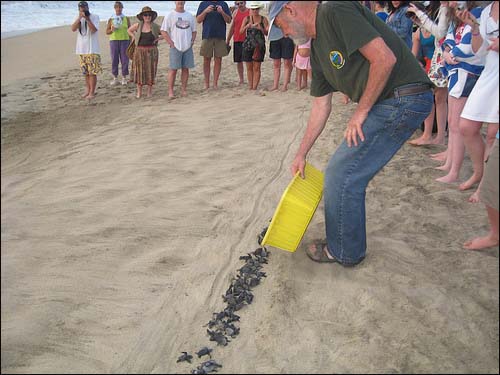 Frank releases hundreds of newly hatched marine turtles on the beach in San Pancho, Mexico as scores of tourists watch.

How Can You Help?

Grupo Ecológico presently receives no grant money whatsoever; it is run by volunteers, and funded by private donations, the sale of t-shirts and home directories.  Frank explained:

“Normally we have 18-25 volunteers annually; however this year we are struggling to get enough volunteers. Due to the current global financial crisis most people who applied to volunteer can not now afford to come,”

You can help their important work to save the sea turtles by volunteering to work here in Mexico or by donating money directly to Grupo Ecológico www.project-tortuga.org. 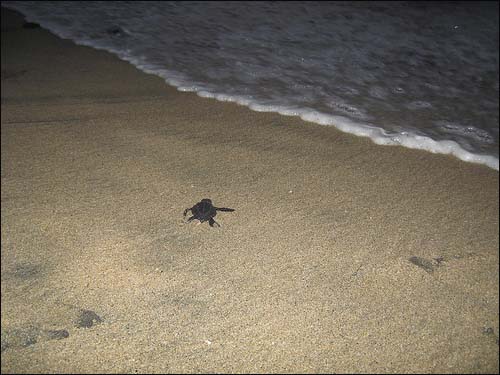 As night falls one of the last turtle hatchlings makes its way to the Pacific Ocean.

Also, please remember that garbage you throw away can find its way to the sea, where turtles can mistake things such as plastic bags for jellyfish. Plastic swallowed by mistake can kill them by causing blockages in the stomach and intestines of turtles and other marine animals. Plastic trash that finds its way into a sewer drain can also add to the rapidly growing Great Pacific Garbage Patch, which is estimated to weigh 3 million tons and cover an area twice the size of Texas.