The Coldest Inhabited Places on Earth

Oymyakon (map) is the coldest inhabited place in the northern hemisphere. It’s so cold, locals say that birds freeze to death in mid flight. Ironically, the village is named for a hot spring. In the local minority language, Sakha, the name means “non-freezing water” because of a nearby hot spring that keeps water from freezing. The village is home to about 800 people, a school that only closes when temperatures sink below -52°C, and one general store. (For reference, at -60°C, spit freezes before it hits the ground.) In the winter, daily life includes ice fishing and hanging around at the store. The coldest temperature was recorded on January 26, 1926 at −71.2℃ (-96.2°F).

Even more remarkable about the little village of Oymyakon are the temperature differences between summer and winter. The greatest temperature difference–and another world record–was a 109.2°C (196.6°F) temperature change from the cold winter to the hot summer. And that’s only around 9 degrees centigrade greater a change than in an average year.

See more pictures of Oymyakon and the nearby town of Tomtor, including a frozen, abandoned gold mine. 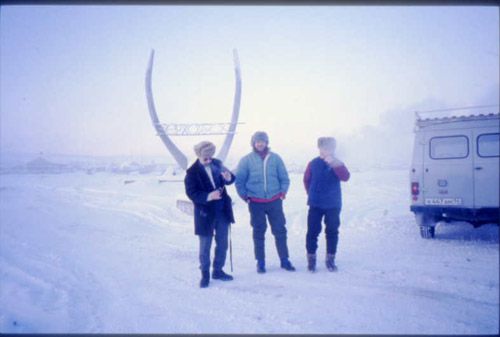 The town sign of Verkhoyansk is held between mammoth tusks. Photo: A. Richichi via Mental Floss

Verkhoyansk (map) vies for the title of coldest village on Earth. Like Oymyakon, it lies within the area known as Stalin’s Death Ring. For nearly 80 years, until the Russian Revolution in 1917, Verkhoyansk was used as a place to send political exiles. Then again, under Stalin, prisoners were sent to the area to build the Kolyma Highway from coastal Magadan to the regional capitol city of Yakutsk. Locals call it the road of bones as it’s said that one prisoner died for every meter of road. The road is 2,000 km long. Today, Verhoyansk has a population of around 1,300, most of whom are reindeer herders or fur trappers.

Since the record temperature in Oymyakon was recorded through extrapolation and not direct measurement, Verhoyansk holds the record for the coldest verified temperature ever directly recorded in the northern hemisphere. That was on a winter day in 1892, when the mercury dropped to −69.8 ℃ (−93.6 ℉). 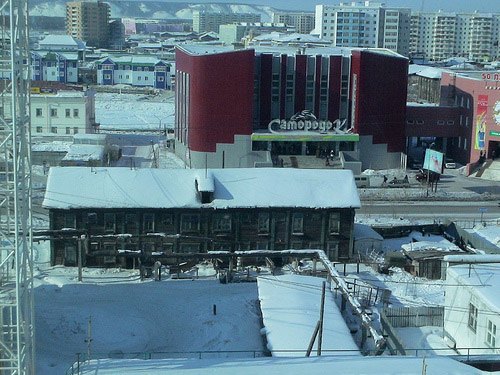 Yakutsk in the winter. Photo: ntx via Flickr, under a Creative Commons license

Yakutsk (map) is the coldest city in the world. It’s also the largest city built on continuous permafrost. Upwards of 210,000 people manage to call Yakutsk home, even during the winter when average temperatures are around -40°C. At this extreme cold, frostbite sets in after only 10-30 minutes and even a slight breeze makes it feel like -57°C. As I write this, it’s -49°C in Yakutsk. If you’re shivering through the winter in a place like Saskatchewan, you may feel better after taking a look at the Yakutsk weather forecast. Yakutsk also makes amusing use of public humiliation to shame citizens into keeping their yards clean despite the cold; something might have been lost in translation, but have a look at the city’s Board of Shame. The coldest temperature ever recorded in Yakutsk was -64.4°C (-84°F). See more photos of Yakutsk. 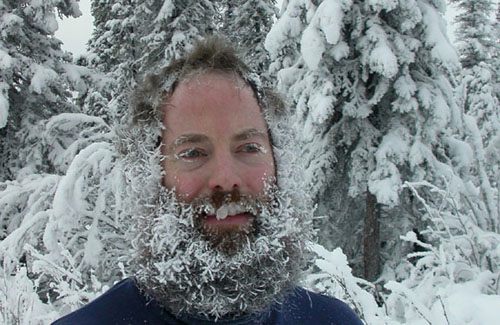 Snag (map) is the kind of place that makes Americans think of Canada as a frozen land of sled dogs, fur trappers and the occasional Mountie. A tiny village in the Yukon territory bordering Alaska, it holds the record for the coldest temperature in North America. On February 3, 1947, when the entire population of snag consisted of 8 to 10 native people and fur traders, thermometers in Snag’s nearby airport measured −63°C (−81.4°F). The temperature was so low that the alcohol in the thermometer had dropped below the lowest readable point and weathermen at the airport had to file additional notches to read the temperature. Sadly for the weathermen, all of the alcohol in the airport was contained in that thermometer. 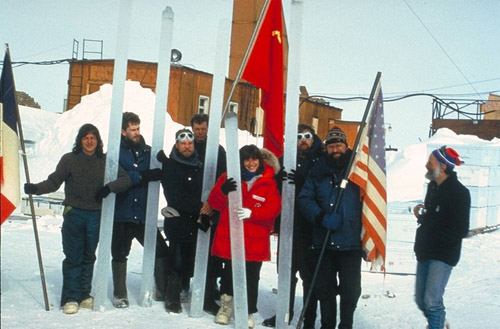 Vastok (map) is by far the unequaled coldest inhabited place on Earth. At 1,300 km from the South Pole, it’s the most remote of all Antarctic research outposts. It was at Vostok Station on July 21, 1983 that researchers recorded the coldest known temperature on Earth: −89.2 °C (−128.6 °F).

During the winter, the temperature hangs at around -65°C (-85°F). The warmest recorded temperature is still well below freezing at -12.2°C (10°F). But extreme temperatures aren’t the only challenge to human life at Vostok Station. Amid the myriad factors making life almost impossible are near-zero humidity, winds up to 97 km/h (60 mph), low oxygen due to its elevation of 3,448 meters (11,312 ft), and the polar night, which lasts several months.