Korean Tigers Back from the Brink of Extinction, but Not in South Korea

Home » Blog » Animals » Korean Tigers Back from the Brink of Extinction, but Not in South Korea 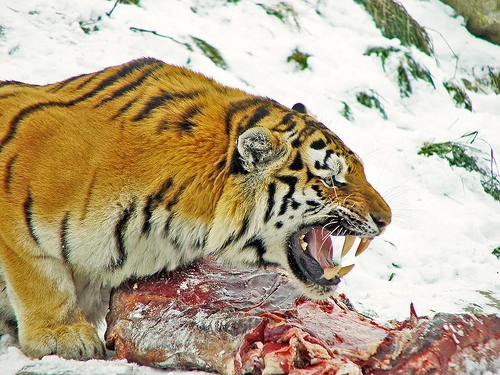 Korea’s national creation myth also tells of a tiger and a bear who asked the son of the ruler of Heaven if he would make them human. He agreed, but only if they could endure 100 days in a cave eating nothing but garlic and mugwort. The steadfast bear endured and became a beautiful woman, who gave birth to Tangun, the legendary father of Korea in 2333 BCE. But the tiger grew hungry and impatient. He left the cave early, unable cope with the hunger and waiting, and has been slinking through the Korean mountains ever since.

That is, until the last century when hunting and habitat loss pushed the Korean tiger over the brink of extinction in the wild in South Korea. With it went an important symbol of Korea’s identity.

“Korea is the only country where the tiger is the centre of its culture,” says Korean artist, Cho Hyun-Kwon. “The people feel very close to the tiger and has personified it throughout history.”

Tragically, the death of Korea’s last wild tiger foreshadowed the end of Korea’s unity. During the tumult of the Japanese occupation, just before the nation was torn in two at the end of the Korean War, the last Korean tiger faded quietly into folklore.

It’s been decades since anyone has seen a tiger in South Korea. The final tiger was captured either in 1922 or in 1944 on the southern tip of the peninsula, depending on whom you ask. But in some places, their ghosts still cast shadows across the landscape. Ribbons of morning mist cut into deep valleys, setting apart the dark mountain ridges one after another like black stripes across the skin of the land; bears, the tiger’s partner in Korea’s creation myth, still wander in some mountains; and autumn’s tawny, dappled hillsides make it especially easy–and slightly unsettling–to imagine the tiger’s presence. 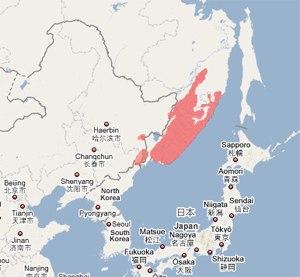 The Korean tiger is the largest tiger subspecies in the world, and the largest living cat aside from the man-made liger. But today, the Korean tiger goes by a different name. It has become better known as the Siberian or Amur tiger since none survive in the South Korean wild and few if any are thought to exist in the most remote North Korean mountains, as shown in the map (left). All the same, a sliver of hope still remains for this mighty tiger subspecies.

Half a century ago, the population of wild Korean, or Amur, tigers dipped to the brink of extinction at a mere 40 animals. Luckily, the survivors possessed enough genetic variety to make a population comeback possible. Their numbers are up substantially now thanks to conservation efforts, largely in Russia. Current estimates place the wild population at 431 to 529 individuals, virtually all living between the far eastern Russian regions of Khabarovsk and Primorsky, which border China and North Korea. It’s a potential conservation success story, but the fate of the world’s largest tiger is still far from certain.

“Wherever people and large carnivores coexist, conflicts between the two are usually inevitable,” says the Wildlife Conservation Society, which has been working in Russia to bring this tiger species back from the brink. “This lesson applies to Amur tigers in the Russian Far East.  Livestock depredations and attacks on people, although exceedingly rare, impede conservation efforts. Traditionally, such conflicts were usually resolved by simply killing the tiger. Cumulatively, such deaths represent a significant mortality factor for small populations of endangered species. We have been working closely with a special branch of the Russian government to address such situations and resolve them to protect both the tiger as well as human life and livelihood. If Amur tigers are to survive in the wild, they must coexist with people.”

In South Korea, the folk tales that stir memories of the country’s native tiger also remind listeners of the constant conflict between tigers and humans. In the stories, the tiger, while often gullible, is nevertheless a terrifying and sometimes deceitful beast. But one tale is different. It tells of how the uneasy relationship between tigers and humans was successfully resolved by a change in the way people view tigers.

In the story, when a terrified woodsman is ambushed by a ferocious tiger, the woodsman cleverly bows low to the animal and claims him as a long-lost brother. Confused and touched by the man’s respect and lack of fear, the tiger believes the man. He agrees not only to spare the man’s life, but also to help him to hunt for food from that day on.

This tale may illustrate an oversimplified solution to problem. But today, it is respect–rather than fear or hatred–that conservationists hope will keep the world’s largest tiger on the path to survival.

Resources for bringing the critically endangered Korean, or Amur, tiger back from the brink of extinction

Image credit: Tambako the Jaguar via Flickr, under a Creative Commons license.