Bicycling it isn’t always easy. Busy streets, honking horns, and inadequate city funding for bike lanes and paths can make bicycling an uphill battle. However, with green in the news, the economy in a slump, and summer on its way, it’s getting easier to find reasons why there are some 1.4 billion bicycles and only about 400 million cars in the world today.

This week, EcoWorldly authors from six continents contributed articles on bicycling in their country. With exerpts from those articles and others in the blogosphere, here are seventeen very good reasons to bicycle no matter where you live. Click the headings as you go to read more. 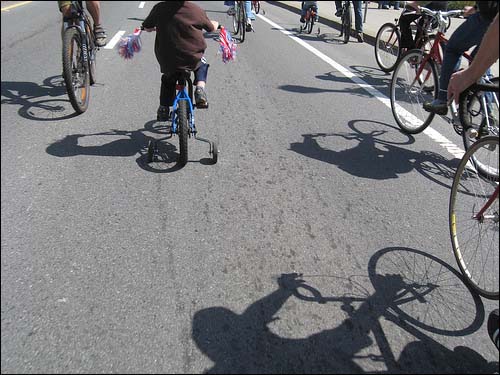 1. The number one thing on most car owner’s minds these days is the price of oil.

“The popularity of bicycles as gasoline prices hit the roof is on a remarkable rise in many US cities,” observes Kenya correspondant, Sam Aola Ooko.

Associated Press Writer, James Macpherson, agrees. “Bicycle shops across the country are reporting strong sales so far this year, and more people are bringing in bikes that have been idled for years,” he writes.

2. Bicycling can make you healthy and hot… er… hotter.

Bicycling with even light effort (10-12 miles per hour) burns 400-500 calories an hour. To shape her legs for the Miss Universe competition, Miss Korea, Lee Ji-seon, started getting her workouts on a bicycle. Apparently, Miss Universe 2007, Zuleyka Rivera of Puerto Rico, is of a similar mind. She cycled through Mexico City in support of replacing cars with bicycles.

EcoWorldly’s UK correspondant, Pem Charnley, connects bicycling with solving the obesity problem in England: “I think, in all honesty, that the UK has come to the realisation that we’ve collectively reached critical mass around the waistline. Every time the news reports that we’re the most overweight in the European Union, pride and roars of approval sweep the land. It’s all we have left since we gave Hong Kong back.

“Devon is an incredibly picturesque county,” he adds, “and it seems an absolute waste to be constantly watching soccer on the TV, when outside lies the undulating greenery of England.”

3. Old bicycles can be modified and made into useful tools.

From generating human-powered home electricity to pumping water, modified bicycles have the power to do more than get you from point A to point B.

“The Engineering for Developing Communities (EDC) program at the University of Colorado at Boulder developed a prototype of a human powered bicycle for pumping water in communities where electricity is unavailable,” reports United States correspondant, Nayelli Gonzalez. “Their model was able to pump at a maximum of 18 feet below ground, at 2.5 gallons per minute.”

In Reggio Emilia, Italy, the “BiciBus” brings teachers, students, and parents together for bicycle commuting to and from schools.

“The BiciBus is a ‘two-wheeled bus,’” writes Italy correspondant, Eva Pratesi. “It consists of a group of students who go to and come back from school guided by volunteers by bicycle (parents, grandparents, teachers…). The students go to the route with their bicycles; they wait for the volunteers and the group and go on together toward the school.

BiciBus is preceded and supported by workshops and technical analysis in the classrooms to educate to sustainable mobility, traffic safety and bicycle knowledge. It’s also possible to organize school trips by bicycle an evening meetings with experts directed to the families in order to talk about health, sustainable mobility and safety.”

In Australia, a similar community bicycling program offers a similar program for adults as well. Cyclists can join the “Bike Bus,” a regularly scheduled commute with fixed routes and two commuting speeds: social and express.

San Francisco, California, has a third option. Though not as organized as a community bike bus program, the San Francisco Bicycle Coalition can pair cyclists with “bike buddies” to share knowledge and tips or commute together to work.

5. Bicycling may encourage the breakdown of economic divides.

In wealthy countries, cycling has been adopted by all echelons of society. In fact, the word “cyclist” tends to conjure the image of a upper-middle class athletic type with an expensive carbon fiber bike, spandex outfit, and bicycle shoes. However, in poorer countries, people who have adopted driving as a social status often equate bicycling with poverty.

“Bicycling in Chiang Mai, Thailand, like in many developing country cities, is regarded with disdain because it supposedly reveals low economic status,” writes Thailand correspondant Masimba Biriwasha. “Many people are reluctant to turn to bicycles because of the social attitudes that demean human powered modes of transportation, including walking.”

EcoWorldly’s Sam Aola Ooko, adds, “In Nairobi, Kenya where I live, not many of those who drive here switch to bicycles, because bikes are regarded as [being useful only to] poorly paid factory who cannot afford the US $1 daily bus fare commuting to and from work.”

“In order for cycling to become an everyday reality in this city,” concludes Masimba, “the society will have to undergo major paradigm shifts at the attitudinal, city planning and policy making levels.” Perhaps that shift can begin one bicyclist at a time.

6. Bicycles are versatile machines with many uses.

Again, Sam Aola Ooko in Kenya: “In Africa, versatility is everything and depending on where you are, a bicycle can be a large farm truck or an ambulance saving lives deep in the African jungle.”

But, as Sam cautions, be careful to select a comfortable seat and have it properly adjusted by a professional bike mechanic.

7. By reducing air pollution, bicycling instead of driving also reduces rates of asthma and lung disease.

There is a strong and increasingly clear connection between car exhaust and life-threatening lung conditions. In South Korea, where I live, the number of deaths from lower respiratory conditions nearly doubled from 1992 to 2002. Worldwide, the World Health Organization estimates that 3 million people a year die from diseases related to air pollution. And this isn’t just in far-off countries. It includes Americans, Chinese, French, South Koreans, etc. In South Korea, asthma in particular is becoming more common. Currently, 3.9% of the population as a whole suffers from asthma. This number grows to around 12% for young children and the elderly.

Australia correspondant, Ross Kendall: “Cycling currently saves the government $227.2 million per year in health costs. The report is called Cycling: Getting Australia Moving and was written by academics from several leading Australian universities on behalf of the Federal Department of Health and Ageing.”

Despite the potential savings in dollars, health, and lives, Australia — like most countries — could stand to significantly improve its support of bicyclists. Still, Ross notes that “big cities have shown increases in bicycle traffic as has the country overall.”

Carectomy’s Josh Liberles adds “2007 marks the eighth consecutive year that bicycle sales have trumped the car market in Australia, with 1.47 million bicycles sold. In addition to the rise in sales, there’s also an increase in the amount people are riding. Cycling is currently the nation’s 4th most popular form of exercise and there has been a 17% increase in participation since 2001. Work commutes by bicycle in Melbourne have increased by a startling 42% in the same time, with a 22% increase across Australia.”

Therefore, an urban area developed for bicycles and pedestrians would be able to replace road area with businesses, walkways, and parks. For a perfect illustration, just take a look at this image. Now just imagine the impracticality of replacing every bicycle in China with a car.

Again, EcoWorldly’s Eva Pratesi: “With a population of about 400,000 inhabitants and a traffic density that affects the historical center, Florence is a city where bicycling is not a choice. Every day a continual coming and going of students and workers flows slowly in the city-center riding for kilometers. Cradle of new Humanism under the Medici Dynasty, Florence preserves today the ancient charm that bikers can appreciate moving towards their destinations.”

10. In some places, with a little modification, a single bicycle can be a business.

“Peruvians also are masters at modifying their bicycles in creative ways,” writes Peru correspondant, Levi Novey, “so that they can be used to transport goods and tools for their work and businesses. Fruits, vegetables, construction materials, ice cream, meat, bananas, pets, and countless other items can be transported by bicycle, when a cart has been added. Unlike in the United States though, these aren’t your everyday bicycle carts.”

Swiss correspondant, Mark Seall, writes, “A bicycle, I once read somewhere, is the most efficient form of human transport ever developed. Coupled with the fact that bicycles are relatively cheap and trouble free, and suffer few of the traffic problems that dog other forms of transport it’s no wonder that cycling has never been more popular.”

But Mark is quick to add that bicyclists should be respectful of pedestrians. Indeed, it’s important for all cyclists to remember that in most places a bicycles follows the same rules of the road as any other vehicle. Check with your local bicycling group or city government to learn more about the rules of bicycling in your area.

According to Motor Trend and the American Institute for Economic Research, the average American car-owner can expect to pay between $240,704 and $349,968 during his driving lifetime. These figures will increase with the price of fuel and the rising cost of the vehicles themselves.

A bicycle can serve your transportation needs for commuting, shopping, and getting around town. Urbanites who are well acquainted with the frustration of paying parking tickets and towing fines will also find that bicycles are an excellent solution. Of course, you’ll still need that fuel: the occasional sandwich or cup of coffee will do nicely.

13. A bicycle crash alone isn’t likely to kill you.

In a sobering perspective on health, over 42,000 people die each year (1 million, worldwide) in the United States and some 2.8 million are injured as a result of automotive accidents. Another 70,000 lives are claimed each year in the United States from medical conditions associated with air pollution (3 million, worldwide). Therefore, for personal safety and the health and safety of others, giving up the car keys is extremely important. As anyone who has experienced a car accident will tell you, car crashes can happen to anyone, not just bad or drunk drivers.

Various studies indicate that bicyclists breathe in less air pollution, making cycling an even more healthy activity. Of course, bicycles emit no air pollution themselves, which ensures cleaner air and better lung health for everybody.

Bikes get an infinite number of miles to the gallon of gas. Now that’s hard to beat! Bicycling emits no greenhouse, ozone, or any gasses of any sort. Cycling, therefore, is an excellent way for all of us to stand up to Global Warming, ozone thinning, acid rain, and other negative effects of air pollution that come in part from automobiles. If everyone bicycled or rode on public transit instead of driving, the United States could instantly cut about 30% of its air pollution in a single stroke.

In contrast to the irritation many car owners feel for other drivers, bicyclists are by and large a supportive community. In many cities, bicycle advocacy groups help to bring bicyclists together. The groups also lobby to add bicycle lanes, improve roads, promote education about bicycling, and support clean air initiatives. These groups generally also offer a wonderful and vibrant sense community for bikers with regular social events and advocacy opportunities. Some examples of bicycle groups such as these are the San Francisco Bicycle Coalition, MassBike (Massachusetts), the Los Angeles County Bicycle Coalition, and Bike New York.

In countries like the United States, fossil fuels maintain a strong grip on the national economy and psyche. Access to oil is a strong incentive for territorial conflicts and even large international wars. It has been widely suggested, for example, that access to oil was one of the key motivators behind the U.S. invasion of the country of Iraq. Bicycling removes the incentive for these violent conflicts, thus helping to cure what has become known in the United States as an “addiction to oil.”

More Posts on Bicycling Around the World: