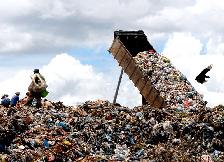 Looking for ways beyond changing lightbulbs and taking the train to help reduce your carbon footprint? Turns out we all could make a big difference in greenhouse gas emissions by not throwing out so much trash and composting our food waste.

That’s the message from “Stop Trashing the Climate,” a report prepared by The Institute for Local Self-Reliance, the Global Alliance for Incinerator Alternatives (GAIA) and Eco-Cycle, a non-profit recycler. The study finds that waste prevention and increased recycling and composting could reduce as many greenhouse gas emissions as are produced by 21 percent of the U.S.’s 417 coal-fired power plants.

Why? There are two basic reasons. One, by trashing stuff instead of reusing or repairing it, we create the demand for new resources … and extracting, manufacturing and transporting those resources generates carbon dioxide. And, two, by tossing biodegradable materials into landfills instead of composting them, we’re creating emissions of methane, a greenhouse gas that is shorter-lived but 72 times more powerful than carbon dioxide.

“Recycling is as important for climate stability as improving vehicle fuel efficiency, retrofitting lighting, planting trees and protecting forests,” said Brenda Platt, co-director of the Institute for Local Self-Reliance and lead author of the “Stop Trashing the Climate” report.  “By avoiding landfill methane emissions, composting in particular is a vital tactic in the battle to stop Arctic ice melting. Biodegradable materials are a liability when buried and burned but an asset when composted.”

The report asserts that “A zero waste approach based on preventing waste and expanding reuse, recycling and composting is one of the fastest, cheapest, and most effective strategies to protect the climate.” It also notes that, per megawatt-hour, a trash incinerator produces more carbon dioxide emissions that a coal-fired power plant. Incinerators also waste three to five times as much energy as recycling helps to conserve.

“A zero waste approach is not only good news for climate stability, it’s also good news for America’s businesses and economy,” said Eric Lombardi, a report co-author and director of the Boulder, Colorado-based Eco-Cycle.

“Stop Trashing the Climate” urges a local and national 20-year goal of zero waste. We can get there, the authors argue, by not subsidizing landfills and incinerators, putting an end to waste incineration, composting biodegradable materials and expanding the nationwide infrastructure for reuse, recycling and composting.