International demand for solar energy has been steadily growing by 20-25% a year for the past two decades. In the United states, solar energy growth is about 60% a year. Looking at how fast solar energy plants are growing and how large they’re becoming year by year is reveals that the future for solar is shining bright.

By 2011, Deming, New Mexico, USA will be the home of the world’s largest solar power plant. This 300 Megawatt solar facility will be 15 times the size of the current largest solar plant on the planet. New Solar Ventures and Solar Torx are the companies behind the project. The solar energy plant will cover as many as 1,300 hectares and employ between 300 and 400 people. The project’s planners estimate that the plant will supply enough energy to power 240,000 homes. (Photo: Flickr. Source: Reuters.)

The Solana solar plant, 70 miles from Pheonix, near Gila Bend, Arizona, USA, will compliment the Deming plant when both begin operations in 2011. It will produce 280 megawatts of energy, provide 1,500 jobs, and cover an area of 769 hectares. The solar power facility will be the child of Abengoa Solar and Arizona Public Service Company. However, the project depends on the United States Congress to renew clean energy tax credits, which would otherwise expire at the end of 2008. (Photo: APS. Source: Newlaunches via EcoFuss.) 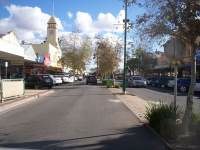 Australia may briefly capture the prize for biggest solar with a plant near Mildura, Victoria, Australia. It will go into operation in 2010 and continue to grow in size until its completion in 2013. A project of TRUenergy and Solar Systems, the plant will generate 154 Megawatts of solar energy. With the Mildura plant complete, Solar Systems will continue to expand in Australia with the goal of 270,000 megawatts of output from a number of plants. Australia’s renewable energy goal is 20% by 2020. (Photo: Wikimedia. Source: Herald Tribune.) 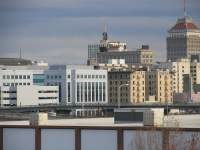 An 80 megawatt solar farm in Fresno, California, USA will be completed by 2011. Cleantech, together with the California Construction Authority, will be responsible for construction. When finished, the plant will occupy about 260 hectares. It will be called the Kings River Conservation District Community Choice Solar Farm. In addition to this solar farm, Cleantech is in the preparing to develop several other facilities of a similar size also in California. In addition to these centralized solar energy plants, California’s Governor Scharzenegger pushed through legislation by the name of SB 1 with which California will add solar panels to one million roofs throughout the state by 2018. (Photo: Wikimedia. Source: Reuters.) 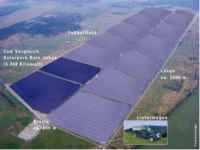 The Waldpolenz Solar Park in Brandis, Rhineland-Palatinate, Germany, near Leipzig. It’s located on the site of a former military airfield. Talk about swords to plowshares. Now that the PV plant has received building approval, its construction is underway. Juwi Solar, the company spearheading the construction, has set a goal of completion of the plant for 2009. At that time, the facility will be able to generate 40 megawatts. (Photo, source: Juwi Solar, PDF, via PV Resources) 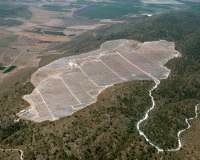 The solar power plant in Jumilla, Murcia, Spain is currently one of the two largest solar energy plant in the world. It produces 20 megawatts with 120,000 PV panels. The panels are spread over an area of 100 hectares and provide enough electricity for the equivalent of about 20,000 houses. With construction recently finished, the plant is expected to generate $28 million USD. The project was completed by Luzentia Group with help from Elecnor’s solar industry Atersa. The solar plant was built over 11 months with 400 people in an area that locals say is perfect since it receives about 300 days of sun a year. (Photo, source: Technology for Life via EcoFuss.)

The other record holder for large PV plants is in the same country, in Beneixama, Alicante, Spain. The plant opened in the summer of 2007. It produces 20 megawatts with 100,000 polycrystalline City-Solar-Modules, City Solar’s own version of PV panels. (Photo: City Solar. Source City Solar via PV Resources.) 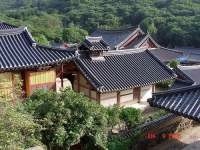 By late 2008, Sinan, Jeollanam-do, South Korea plans to match Spain’s solar energy output of 20 megawatts. 109,000 solar panels are expected to by installed. Working with SunTechnics, the solar project is part of South Korea’s Act on Climate Change. The country currently generates electricity with about 50% Middle Eastern oil, 25% coal, 22% nuclear, natural gas, and hydroelectric, and just 2.3% renewable. The goal is 9% by 2030. News of the solar farm coincides with South Koreas announcement that they will also be building one of the world’s largest tidal energy plants by 2014. (Photo: Flickr. Source: Herald Tribune.)

This 14.2 megawatt solar park in Las Vegas, Nevada, USA is operated by SunPower. It’s located at the Nellis Air Force Base, which it powers. This saves the Air Force base an estimated $1 million USD annually in energy costs. The solar array covers an area of over 56 hectares and comprises 70,000 PV panels. (Photo: SunPower. Source: SunPower, PDF, via PV Resources.)

Another accolade for big solar in Spain goes to the plant 12 miles outside of Salamanca, Salamanca, Spain. The solar field incorporates 70,000 PV panels from the Japanese Kyocera Corporation into three separate 36-hectare arrays. The total energy output is 13.8 megawatts. The plant opened in September, 2007, with a grand inauguration in Salamanca. It’s been powering roughly 5,000 homes ever since. (Photo: Kyocera. Source: Kyocera via PV Resources.) 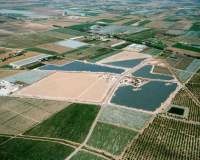 Sunny Spain captures another solar opportunity in the PV plant at Lobosillo, Murcia, Spain. The PV plant has a 12.7 megawatt output. The solar project is currently in operation, and is also being expanded from 80,000 PV panels to 80,808. The plant uses PV panels from Ecostream. (Photo: Ecostream. Source Ecostream via PV Resources.) 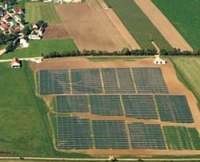 The “solar park” in Arnstein, Bavaria, Germany went into full scale operation in 2006. It features over 1,400 PV solar panels that can move with the angle of the sun to capture maximum light energy. This design allows the panels to capture up to 35% more energy. The plant, which took 14 months to build, currently produces 12 megawatts of energy. The solar power company involved with this plant is Solon AG. Germany is also a leader in renewable energy. The country increased its stock in renewables from 6.3% in 2000 to 12% in 2006. With this in mind, some predict 40% renewables by 2020. (Photo: Ubergizmo. Source: The Raw Story.)

The solar energy farm on the hills outside Serpa, Alentejo, Portugal, on the sunny southern coast, helps make Portugal the renewable energy leader it is. The location is ideal as the area receives 3,300 hours of sunlight a year. The 11 megawatt power plant opened in March of 2007. Its 52,000 PV modules span over 60 hectares. They produce enough energy for about 8,000 homes. PowerLight, the company that operates the solar farm, estimate that energy produced by their panels prevents 30,000 tons of greenhouse gas emissions each year from burning fossil fuels for energy. In addition to this plant, Portugal will invest $10.8 billion USD in renewable energy. (Photo: Flickr. Source: Electrical Contractor.)