On August 9th, Nottingham switched on the largest solar carport in the UK as part of a green energy program. The carport was installed by Flexisolar, and features some 448 solar panels, or enough to generate the power for over 20 homes. The estimated output of the solar panels is 55.7Mw per year, which could generate more than £10,000  in revenue per year. The energy will be used for lights, powering electric cars, and powering the leisure center, with excess energy going back into the grid to benefit from the Feed In Tariff, which will eventually generate the council money.  Nottingham is also planning two solar canopies over car parks, which will save the city an estimated £33,000, but installations have not yet begun. 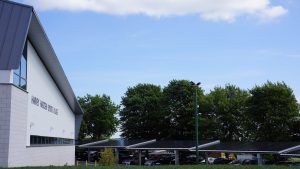 Nottingham’s solar carport has been in planning for some time, and was designed by Flexisolar’s Christopher Jackson. The carport is designed primarily to provide power for the electric car charging stations under the canopy, but will also provide lighting, feed energy towards lighting for the Harvey Hadden Leisure Centre, and feed energy into the grid to earn income for the council. Robert Carpenter, the managing director of Flexisolar is quoted as saying that the main goal of the project is to demonstrate capability, and drive costs down. His claims show that he hopes solar carports become an alternative to solar rooftops, and for good reason.

Installing a solar carport over an existing parking lot or garage costs money, but it also saves it. In addition to saving money on electricity, lowering carbon footprint, and lowering costs in other ways. One example is a German retail centre who installed solar carports and watched their carbon footprint and costs go down, but also saved extensively during winter months on reduced bills for salting and digging out the parking area.

This carries over to domestic installers, who can install affordable single or two-vehicle carports over their existing driveway parking space to install solar, aim the roof in whichever direction they choose, and then install solar panels. Because most carports are relatively inexpensive to build, and offer benefits of protecting the car and the parking space at all times, it’s a logical choice for those planning on a carport or garage anyway.

For commercial users, the benefits are even larger. With over 39 retail centres in the UK that are over 70,000 square meters in space, and hundreds that are smaller, there are literally hundreds of thousands of square meters of rooftops and available space over shopping centres and parking lots that could be utilized for solar power, and on the scale to provide a significantly large portion of their own power. Because most carports are inexpensive to install and are easy to install, they could provide significant returns over the course of as little as 10 years for most retail and commercial installations.

However, because rooftop solar arrays are still slightly more affordable to install, most businesses will install those first. Experts like Christ Bratherton, business development manager at Ecolution Renewables suggests that solar carports will be installed by city councils and individuals first, and only after other viable space is taken in the area. Nottingham’s solar installation is actual proof of that, as the majority of current solar carports in the UK are currently owned by city councils.