This Is Not an Oxymoron: China as the World’s Green Superpower

Home » Blog » Environment » Energy » This Is Not an Oxymoron: China as the World’s Green Superpower

Located in north-western Qinghai province, Longyangxia Dam Solar Park covers 1- square miles (26 square kilometres). It has the capacity to generate 850 megawatts of electricity, which is enough to supply power to 200,000 households.

Built in 2013 at a cost of about 6bn yuan (£721.3m), the solar farm has been on almost constant construction that at the moment, it now has 4 million solar panels. Photos from the National Aeronautics and Space Administration Observatory in January 2017 has revealed a sprawling complex of solar panels high on the Tibetan plateau, a far cry from the 2013 pictures of the same area. 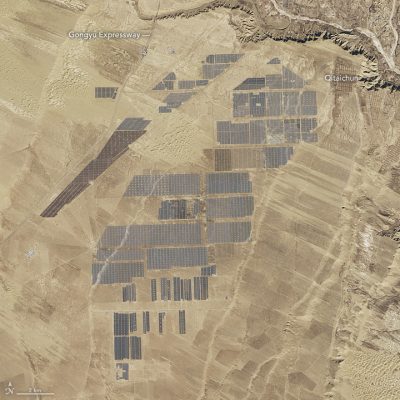 The continuous development of the world’s largest solar farm should not come as a surprise. Pledging to cut its greenhouse gas emissions as per the Paris Climate Agreement, China has already invested a total of $103 billion (£84 billion) into renewable energy. It has also overtaken other green great powers such as Germany, Japan, and the US since its total installed capacity has reached 77 gigawatts in 2016.

And if that’s not enough, China is also planning a new solar farm in its northwest region. Once finished, it will have a capacity of 2 gigawatts and will cover 4,607 or the equivalent of 7,000 United States city blocks. With a 15.6 billion-yuan (£1.85 billion) budget, it will have about 6 million panels and will be the biggest solar farm that the world has ever seen.

The company that will oversee its construction, Minsheng New Energy, was established in October 2014 by China Minsheng Investment Corp to develop clean energy. By June 2016, the project is already half done. According to CM Guangfu (Ningxia) Investment Company, a unit of Minsheng New Energy, 380 megawatts of capacity has already been connected to the grid. Once completed, the 2 gigawatt-hours of electricity that it will generate will be equivalent to that of a 400-megawatt coal-fired plant. A far cry from the current king’s 850 megawatts and certainly a testament that China’s reign as the current green superpower will not be a short one.

Hot on China’s heels, continually falling solar panel prices have given the solar industry in Europe a shot in the arm. Although lagging behind China, in Europe, Germany remains the continental leader followed by Italy, France, Spain, and Belgium.

While the United Kingdom is not in the top leagues, solar energy is already on the ascendant, beating out coal for the first time in 2016. It is reported that the total power generated by solar energy for over half the year is 6,964 gigawatt hours (GWh) or 5.4% of the UK’s total electricity demand while coal stands at 6,342 GWh or 4.7%.
However, with the looming tax hike of up to 800% on rooftop solar schemes, it still remains to be seen if the solar industry will continue to thrive in the UK this 2017.