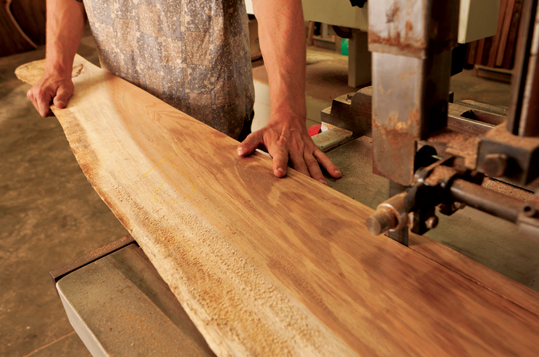 This beautiful shot was taken by David Croxford. All of the wood used by HFC is sourced locally from the Hawaiian Islands.

Globally, manufacturing facilities have shifted to the places where workers will generally work for the least amount of money and under the worst conditions. Subsidized shipping alongside these weak worker protection laws combined with international free trade agreements have led to the slow degradation of good paying manufacturing jobs. Certain industries, however, are starting to make a comeback in terms of localized manufacturing, and one such opportunity is in custom furniture built from locally sourced natural resources. Here, we profile Honolulu Furniture Company, a great case study in local furniture manufacturing success.

We’ve all heard the phrase “a picture is worth a thousand words”, but what about a piece of furniture, how many words is that worth? It’s hard to say just how many – given the arbitrary value of a “word” – but it’s probably safe to say that a well crafted piece of furniture can speak volumes. The story behind any given piece of furniture (and no, we aren’t talking about the furniture you buy at IKEA) goes well beyond the details of the finished product. Especially if it’s one of the pieces being crafted by Thorben Wuttke at the Honolulu Furniture Company.

You see, Thorben isn’t in the business of mass producing furniture, rather, he’s in the business of crafting unique furniture that could be talked about as pieces of art as much as they could be an armoire. Every piece Thorben creates is hand crafted from a unique collection of materials (all locally sourced and often re-purposed/re-furbished) and as a result his furniture truly takes on a life of it’s own. His wood of choice is the Monkeypod tree (given it’s prolific growth throughout the state of Hawaii), but many of his pieces will also be comprised of douglas fir and other non-native woods.

The cupboards and counters in this Starbucks in Honolulu were all crafted by the Honolulu Furniture Company.

Every project that he undertakes is governed by the following criteria: it must be simple, locally sourced, functional, sustainable and made with a high degree of craftsmanship. He applies this criteria to literally everything that he makes (whether big or small) and frankly, the results speak for themselves. But don’t just take my word for it, check out the following video/interview with Thorben about his Maui Blue collection that was released back in 2013:

So, if you’re looking for a new piece of furniture to help spruce up any room in your house, be sure to check out the Honolulu Furniture Company. They have all sorts of unique, one of a kind pieces, and if you don’t see something you like they can build a custom piece just for you! All you have to do is ask.