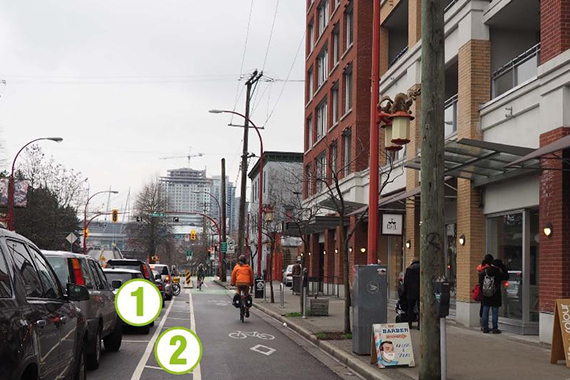 Slow Streets is an organization in Vancouver whose motto is “People, Not Cars.” What exactly to they mean by that? Here’s their mission statement:

Slow Streets is an approach that challenges what streets are for, and who they are for. A typical North American city street has been designed to move the maximum number of automobiles through as quickly as possible. Since streets are a public asset, does fast moving traffic bring the best return on our investment? Slow Streets demonstrates through research that designing streets strictly for automobile right-of-ways is ultimately harmful to cities. Therefore at Slow Streets we are calling for slower, more inclusive streets that generate more value and a greater return on our investment. 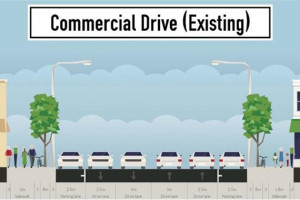 Slow Streets challenges the conventional wisdom that our streets should be made wider to promote safety. Based on data from the Insurance Corporation of British Columbia, they found the rate of collisions between cars and people walking or bicycling was actually more than twice as high at intersections with 6 lanes of traffic than at intersections with two lanes of traffic during the period 2009 to 2014 (3,412 vs 1,490).

The group also finds that many people would walk or bike more if they felt safer doing so. They say the way to make them feel safer is to re-design city streets to provide wider sidewalks and protected bike lanes. They refer to these as “complete streets” and point to Union Street (a former 6 lane street depicted in the picture above) in Vancouver as a typical example. Here, bicyclist are protected from moving traffic by a buffer zone of parked cars. Bike riders and pedestrians are also kept separate from each other. 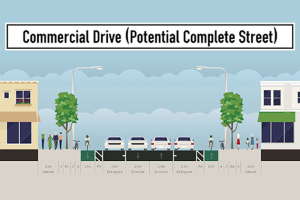 Slow Streets says slowing the pace of urban travel is a good thing. It costs less to build bikeways and sidewalks than streets, it benefits businesses located on complete streets which get more walk-in traffic and it promotes a feeling of community that is often missing from modern cities.

Building infrastructure for pedestrians and bicyclists encourages more people to to do both. Since Vancouver started adding dedicated bike lanes in 2008, the number of people riding bicycles has increased almost 50%.

Other cities are also pushing ahead with dedicated bike lanes and walkways. London has several initiatives underway to encourage bicycle commuting and bike share programs are gaining acceptance in many communities. There are also innovative new designs proposed to further protect people on bikes from collisions with automobiles at urban intersections.

Just as the “slow food” movement was created to offset the fast food craze, so also the “slow streets” idea is starting to challenge the notion that everyone should drive a 2 ton automobile around town and have a dedicated parking space for it available on demand. Many people think urban living would be much improved if the pace of life was reduced to a more human scale, including visionary writer Jane Jacobs who wrote in 2004, “Not TV or illegal drugs but the automobile has been the chief destroyer of American communities.”