Top 25 US Cities For Bicycle Commuting 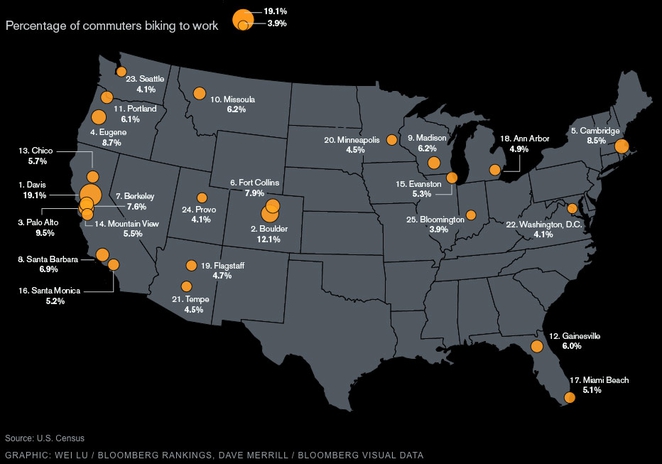 Bloomberg News has assembled data from the US Census about the number of people who bike to work and where they are located. The top 25 US cities for bicycle commuting are shown in the graphic above. The top 5 on the list are:

Clearly, the West Coast, with its mild winters and lack of snow, is far ahead of the rest of the country.

While some might argue that the most healthy way to get to and from work is walking- a mode of travel that’s the most ecologically friendly, as well- biking is not far behind, as biking offers many of the same health advantages as walking and is mostly emissions free (once you get past the manufacturing and shipping of the bikes, that is).

Some of the drawbacks to cycling are that you need a secure place to keep your bike during the day until it’s time to return home, you need money to buy and maintain your bike, and- if your tastes and budgets in bicycles run towards the expensive– you could be making yourself a target for crime.

Taking public transportation and car pooling- also good ways to get to work while respecting the environment- are also popular in many “cycling cities”, and- of course- driving your personal car is the least sustainable way of getting to work. That’s particularly if you are the only person in the car, and one of the reasons cities in many parts of Europe are considering a private car ban altogether.

New York City has a large and growing group of bicycle commuters, but their numbers are still only a tiny percentage of all the commuters who go into and out of the City every day.

Source | Images: US Census, via Bloomberg.