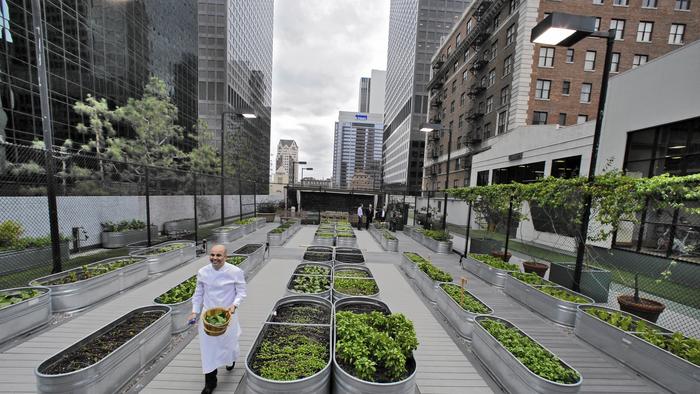 In the wake of the landmark passing of California’s Neighborhood Foods Act, urban farming is flourishing in Los Angeles. In October, City Councilmen Felipe Fuentes and Curren Price filed a motion to allow owners of vacant lots in the city to qualify for tax relief if they make their land available for agricultural use. Los Angeles has about 8,600 such lots. “By converting empty parcels into urban farms, we can encourage local economic development, green our more closely knit communities and provide produce in neighborhoods that lack access to fresh foods,” says Fuentes.

Earlier this month, LA Times reporter Nita Lelyveld went on a tour of three urban farming locations in LA sponsored by Seedstock, a Los Angeles-based company that offers consulting services and disseminates information about sustainable food projects. What she found was a bountiful harvest of fresh fruits and vegetables growing in complete harmony with the bustle and sprawl of the city.

A Visit To The Jonathan Club

The tour began on the roof of The Jonathan Club, a posh private social and dining club in downtown LA. There, executive chef Jason McClain has created a vibrant garden where once there was an underused paddle tennis court. In galvanized horse troughs, McClain raises gem lettuce, swiss chard and microgreens as well as broccolini, baby carrots, yuzu, blueberries, figs, snap peas and heirloom tomatoes.

The garden produces over $150,000 a year of local, organic food above the din of LA traffic in the streets below.  It also provides work for a local urban farming venture called Farmscape Gardens, whose farmers plant the Jonathan Club’s seeds, compost the beds and rotate the crops.

After sipping a beverage called an Autumn Escape, which features garden-grown rosemary, fresh pressed pineapple, cinnamon, lime and club soda, the group climbed aboard a bus to visit Muir Ranch, a farm on the grounds of Pasadena’s Muir High School.

Among the blooming roses, sunflowers and squash, Mud Baron, the goateed project director, spoke of the farm’s community-supported agriculture program in which people subscribe to get weekly flowers or boxes of fresh produce. Besides growing food and flowers, the program is about getting young people interested in gardening as a way to push them toward better futures.

“At the heart of what I’m trying to do is to teach these kids to be entrepreneurs,” said Baron. He has plans for a food truck run by students and a charter school centered on making things. He wants to teach kids how to grow vegetables, how to pickle, how to weld benches and how “to really do something.”

The Tour Ends At Glassell Park

At Glassell Park in the northeast corner of Los Angeles, there is a simple brick building that was used to stored Chinese noodles until recently. But soon it will contain individual production spaces for 50 wholesale food makers with all sorts of support services on site. A nonprofit will take any  locally grown food that might otherwise go to waste and turn it into healthy meals for senior citizens. That project will be staffed by young people too old for foster care or those recently released from prison.

Both are projects of L.A. Prep, a food production business incubator for local entrepreneurs, and L.A. Kitchen, the nonprofit organization founded by activist Robert Egger.

The Link Between Urban Farming And Community

The common denominator in all these urban farming endeavors is that the skills needed to grow nutritious, local food can also strengthen surrounding communities by giving people the skills they need to work at good paying jobs both in and out of the agriculture sector of the economy.