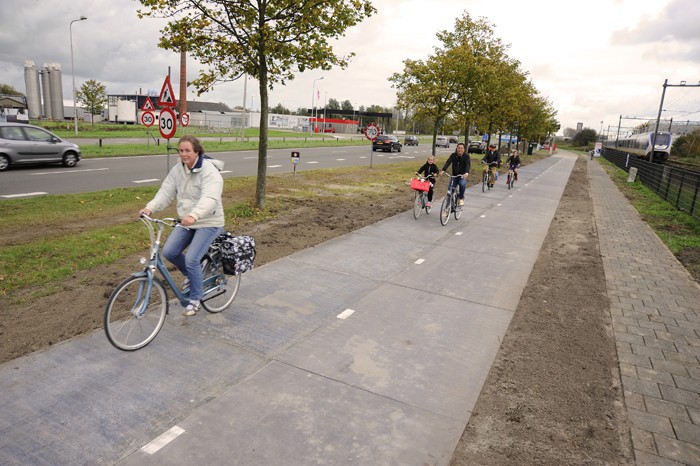 On November 12, the first SolaRoad bike path will open in a northern suburb of Amsterdam. The Dutch are fanatical about using bicycles for transportation, especially in urban areas where finding a parking space for even a compact car is difficult if not impossible.

Since 2009, the Netherlands Organization for Applied Scientific Research (TNO) has been exploring the solar potential of Holland’s nearly 200 square miles of roadways. The SolaRoad bike path is part of a three year feasibility study to determine how well scientific theory translates into real world performance.

The experimental bike path is 230 feet long and is made from pre-fabricated concrete slabs that have a layer of crystalline silicon solar cells with a protective layer of tempered glass on top. The team says that this top layer is translucent to allow sunlight through but strong enough to provide a safe road surface.

Over the next three years, energy from the SolaRoad will be directed back into the grid while the team conducts experiments to determine how much electricity the bike path is capable of generating and to gauge the safety of the road in different weather conditions.  The NTO group hopes that, one day, an expanded version of the SolaRoad project will be able to power traffic installations, road lighting, homes and electric cars.

By concentrating on a small project like the SolaRoad first, the NTO will gain valuable insights into how to design more cost effective projects in the future.