The city of Chicago is many things to many people, but it doesn’t have the “green” mental associations that, say, San Francisco or Portland have. That’s starting to change, however, and the plan to introduce smog-eating pavement to Chicago’s famous Cermak Rd. (which began back in 2012) could a big difference in the way people think of the Windy City.

From storefront to street, the city of Chicago is installing light-colored pavement (which reduces the energy use of the street’s shops by up to 42%), closely-spaced recycling bins, bioswale planters, and a new bike lane across a two-mile stretch of Blue Island Avenue and Cermak Road in the Pilsen neighborhood.

I’m rather partial to Oak Park, myself- but no one asked.

For its part, the city of Chicago is calling the project “an unprecedented demonstration of how cutting-edge sustainable design and “complete streets” principles can be implemented in the public right of way,” and has spent more than $14 million on that stretch of Cermak Rd. over the last 2 years. The real trick stuff, though- where the money’s doing the most good- is in that smog-eating pavement I mentioned earlier- and this project marks the first commercial roadway application of photocatalytic cement, which cleans the surface of the roadway and removes nitrogen oxide (NOx) gases from the surrounding air through a catalytic reaction driven by UV light. 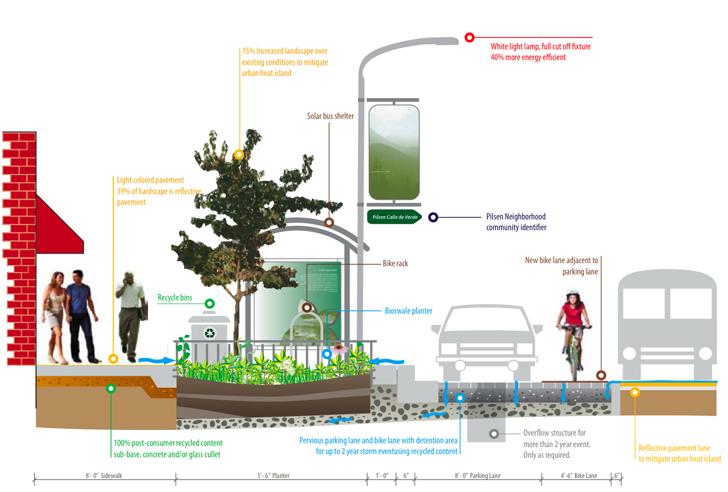