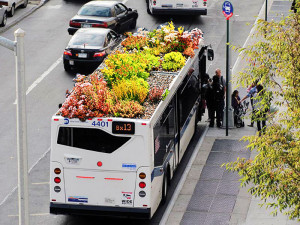 As part of his thesis project at NYU, graduate student Marco Castro Casio designed a garden for the top of buses

Casio calls his mobile garden idea “Bus Roots”, and says it is a way of “reconnecting urban communities with nature in a practical and playful way … bus roots is a playful public transportation project that uses plants as a creative medium. It connects the citizens with their community while trying to use the least amount of resources and improving the quality of the environment around it.”

The people at Inhabitat liked the Casio’s idea so much, they awarded it a prize in their latest DESIGNwala contest, saying “It brings life to a forgotten space and provides humans with a reminder to pause and let nature help lead a healthier life.” The prototype garden is composed of mostly low growing succulents.

The demonstration/proof-of-concept “Bus Roots” bus has been making the rounds of festivals and fares in the metropolitan area to introduce others to the idea and, hopefully, convince the city to make the move to a greener option. Casio estimates that, if all 4,500 NYC buses had such and installation, it would add over 35 acres of green space to the city’s environment. 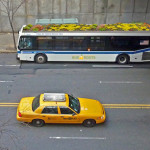 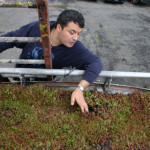 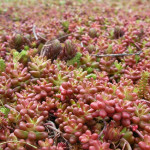