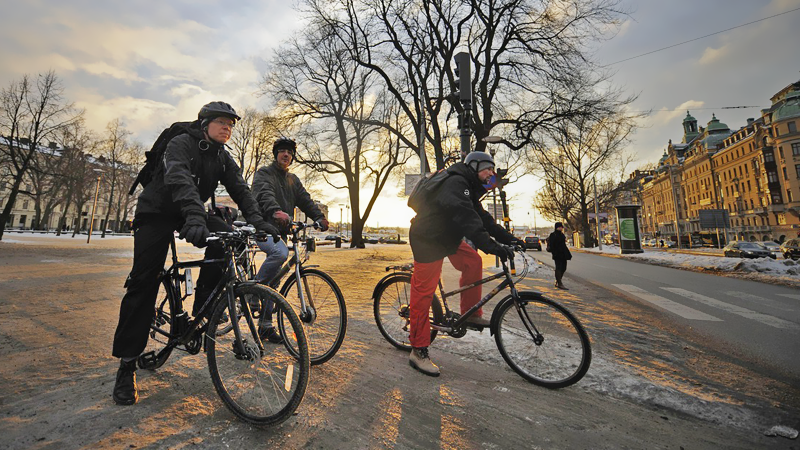 Utah, Minnesota, and Washington have seen traffic fatalities decline by up to 40%, thanks to campaigns to reduce pedestrian, bicyclist, and motorist deaths to zero. Aptly named “Vision Zero” and modeled by similar programs launched in Sweden, where pedestrian deaths have dropped by more than 50% since the plan was implemented, it’s hoped that these city planning strategies will allow cities like Portland and Chicago to replicate Sweden’s success.

Vision Zero, however, is very much a national program. In New York City, for example, Mayor Bill de Blasio won office on the promise of reducing traffic deaths in a city where someone is killed or seriously injured by a motor vehicle every two hours on average. “The fundamental message of Vision Zero is that death and injury on city streets is not acceptable, and that we will no longer regard serious crashes as inevitable,” he wrote in a letter to the people of New York. “They happen to people who drive and to those who bike, but overwhelmingly, the deadly toll is highest for pedestrians—especially our children and seniors … to save lives, roads must anticipate driver, bicyclist, and walker errors: “We are human and we make mistakes.”

What that translates to, in practical terms, is that New York will ramp up efforts to teach basic street safety in schools, while allowing the city planning experts in the legislature to lower speed limits in some areas to 25 MPH. At the same time, New York plans to increase/intensify police enforcement of speeding laws, of failure to yield to pedestrians, and for dangerous driving. Mayor de Blasio also has plans to create a permanent “Vision Zero Task Force” at City Hall, to ensure that these changes outlive his tenure as mayor of NYC.

Across the nation, Nicole Schneider, of Walk San Francisco, writes, “Vision Zero is about changing the culture of our dangerous streets … (the program) is also about empowering historically under-represented communities that are disproportionately burdened by traffic injuries.” For Schneider and the people she’s working with to make Vision Zero a reality in northern California, that means the city will:

The Vision Zero plan has already been endorsed by the San Francisco Police Department, upon whom the burden of enforcing the new safety measures will fall – maybe. That “maybe” is in place because news like this and plans like Vision Zero seem to support Yes! Magazine’s claim that “America is on the verge of a walking revolution” and that bikes and comfortable shoes will soon replace sportscars and luxury sedans in America’s cities. Still, it seems logical to say that pedestrian safety must come first. “We won’t increase walkability—which is good for people’s and communities’ health—until we make the streets more safe and comfortable for walking,” said Katherine Kraft, America Walks’ National Coalition Director and Coalition Director of Every Body Walk! “Vision Zero,” Kraft says, “is (one) path toward a better life for all of us.”

You can read more about Vision Zero at Yes! Magazine by visiting the source link, below, and let us know what you think about these cities’ plans to promote cycling and walkability in the comments section at the bottom of the page. Enjoy!