Need for Immigration Reform Being Underlined in Blood

Two months ago 15 people drowned trying to cross the border that separates Morocco from Spain. Video testimonies document how the men struggled to stay afloat, as the Spanish military police shot rubber bullets at the frightened and exhausted, people; none of the men seeking a better life survived. Many citizens were outraged at the police’s behavior, but still no one has been held accountable for these deaths. The government contradicts itself and keeps changing its version of events, and justice still is not served. Local NGOs blame Spain’s systematic failure to take action and assume responsibility for these deaths and human rights violations. 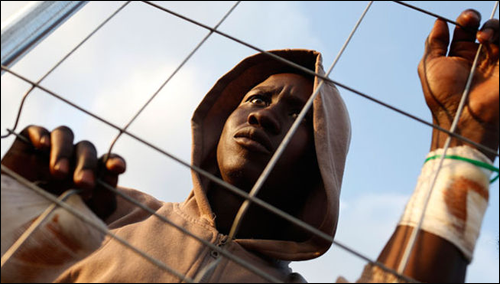 The Spanish media is fostering widespread panic by describing the “avalanches” of people waiting to cross the border. Many believe that once immigrants enter, they will steal jobs and swamp public health services. What many fail to realize is that actually southern Spain has the lowest transit rate in all of Europe. Frontex, Europe’s border/frontier agency, states that people who entered Europe through this crossing point accounted for only 5% of all entries made into the European Union. Andalucia’s Pro Human Rights Association also claims that the media’s statistic of 30,000 waiting to cross the border is completely false.

Besides killings, there are constant irregular deportations that infringe the current legislation that ensures the legal right to asylum, medical assistance, and legal resources. Spain’s Refugee Aid Commission’s spokesperson, Jose Antonio Rubio, highlighted his country’s deplorable attitude towards refugees. For example, Spain absurdly asks Syrian refugees for visas. How can people fleeing civil war be expected to go through the bureaucratic process of obtaining a visa?

Additionally, as our government flaunts solidarity and peace jargon, it denies asylum to 90% of those who request it. Instead of protecting human rights, our borders have become a pseudo prison camp that limits freedoms and assistance. In 2012, about 3000 people solicited asylum, the lowest amount since 1988. Estonia is the worst country in the EU to provide asylum status, and Spain is second to last. While Germany offered 22,000, Spain gave less than 300, and the numbers keep decreasing.

In his paper: A Guide for Humanitarian, Health Care, and Human Rights Workers, John H. Ehrennreich reveals the following:

“Refugees have, typically, experienced personal terror or witnessed the physical abuse or death of loved ones. They have suffered the destruction of their homes and communities, the loss of their traditional livelihoods and of material possessions. They may have been forcibly detained or spent periods in concentration camps and may, prior to arrival in the refugee camp, have been tortured, raped, or otherwise physically abused. Their personal status, belief in themselves, trust in others, and hopes for the future have been shattered. They feel vulnerable and mistrustful. They have become dependent on others for the physical necessities of life.

In refugee camps, they may experience poor housing, disruption of personal networks, lack of medical care, interruption of their children’s schooling, uncertainty regarding their rights and legal status and future. The refugee camp itself is likely to be a source of ongoing stress, with overcrowding, lack of privacy, poor sanitation, long periods of inactivity, noise, disrupted sleep, and dangers of assault or rape.”

Understanding these realities, why do we insist on stigmatizing, marginalizing, and hating people who seek to escape and live a safer, better life? Why do supposedly developed countries promote ungrounded stereotypes and deny foreigners in need entrance? Why do we blame and punish others for where they were born, as if that were a choice? As untold numbers perish trying to flee to safety, the desperate need for immigration reform continues to be written in the blood of these dead refugees.