Message in a Bottle: the Method Method

Home » Blog » Updates » Message in a Bottle: the Method Method 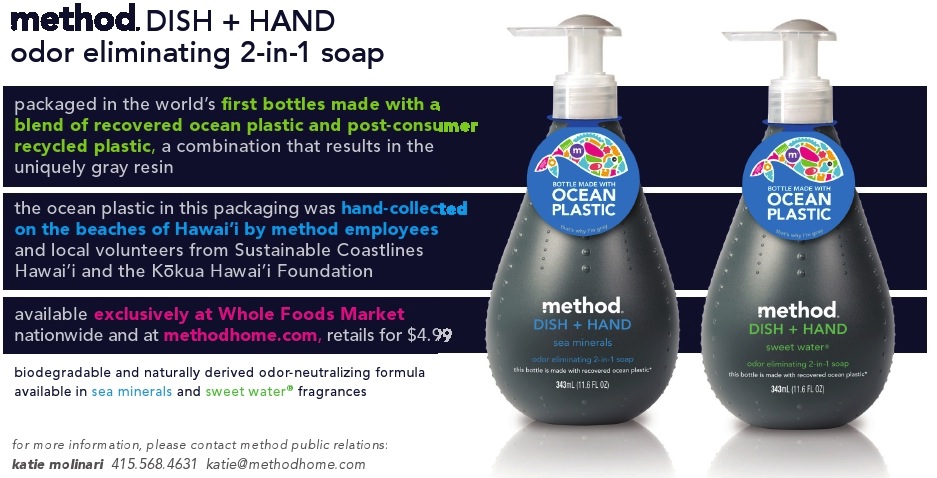 Method Soap and Sustainable Coastlines have teamed up to bring some much needed mainstream attention to the problem of plastic pollution. In 2012, the two did a pioneering, eyebrow raising project to gather plastic trash from Hawaii’s beaches, and turn them into new bottles that Method then used for new soap products. Method, which was founded in 2001, is one of the companies we love here at the Important Media Network. They not only make a very healthy set of products (soap, detergents, and the like), but they go the extra mile with their programs to reduce waste, which include pioneering some great refill technologies that significantly reduce plastic consumption.

Here in Hawaii, we live not far from the Great Pacific Garbage Patch, an area of the Pacific Ocean that contains upwards of 60x more plastic than plankton, and is roughly double the size of the state of Texas. With the prevailing currents, the windward (east) side of our islands get a daily dose of plastic debris deposited on the beach.

“You have one of the most beautiful places in the world, with these beautiful and endangered species, that are making their homes on a pile of plastic,” said Lowry, who noted that a picture he showed of plastic trash lining the tide line of a beach was taken just a mile from where we are having the Wanderlust Festival, on what looks like a pristine section of the North Shore of Oahu. The very next slide he showed was also taken on the same beach. That’s an endangered Green Sea Turtle coming up for a rest and finding a pile of trash on an otherwise beautiful beach:

Lowry said the 100% post consumer recycled bottle they made from are impractical and expensive. “This is not the solution to the problem,” he said. “What it is is an opportunity to bring a lot of awareness to the issue.”

Kahi Pacarro, Executive Director of Sustainable Coastlines, agreed, saying, “We need to recognize the massive greenwashing that is going on with Coca-Cola and other brands that are bragging about having 5% post consumer recycled plastic in their bottles, or some parts of it that come from plants. That’s not a solution, either.”

The good news is that the efforts of Sustainable Coastlines and Method have brought a TON of attention to the plastic waste issue. Lowry said the press that was generated by the recycling of the beach cleanup plastic was equivalent to 150 million impressions to date. The attention has certainly (and deservedly) benefited Method, which today celebrated the 13th anniversary of getting shelf space for the very first time, has clearly gotten the attention of their big industry competitors. Clorox clearly sees them as a threat to their unsustainable business model, and in 2010 tried to exert legal pressure to halt Method’s growth.

It’s not just a Pacific Ocean issue, of course. Plastic is pervasive. The Atlantic Gyre is almost the same size as the Pacific Gyre, and Gyres of plastic have been found in all major bodies of water, including the Great Lakes.

Interesting to note is that it’s not just ugly and a terrible legacy we’re leaving our children, it’s also a human health hazard. “Plastics are sponges, and sources, for pollutants,” according to Captain Charlie Moore, author of Plastic Ocean. “Fish are eating it, and ultimately it’s making its way into our food.”