How You Can Make Bikes vs Cars Documentary a Reality 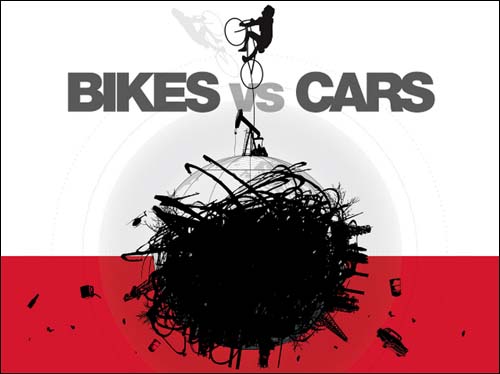 The planned documentary Bikes vs Cars is more than a film, it is part of a global movement to fundamentally change how we get around. Although the simple bicycle is an affordable, sustainable, healthy and fun method of transportation, in many cultures the polluting inefficient automobile still continues to prevail. This powerful film analyzes the politics and consequences of subsidizing the car, and also highlights individuals from around the world who are fighting to improve bike access and infrastructure.

Swedish filmmaker Fredrik Gertten and WG Film have just launched a Kickstarter campaign to raise funds for this new project. Attempting to tackle the automobile and oil industry is something of a David and Goliath undertaking, but such a mismatched scenario is familiar territory for these artists; these dedicated folks are the resilient underdogs whose courageous efforts to successfully defend themselves against corporate leviathan Dole were chronicled in Big Boys Gone Bananas!* two years ago. Director Gertten offers some of his motivations for making this important movie:

“I was born in Malmö, Sweden, a city where the bike is the natural choice for going from one place to another. I’ve traveled the world wondering why there is so little space for bikes, why it’s so dangerous when it’s so much more fun to explore a city by bike. The car model as we know it has reached an extreme level with constant gridlock and millions of productive hours lost. The frustration is growing and cities need to look into new models.

The urban biking movement is growing. Beginning just for the passion, the freedom on the bike, it has evolved into a political movement asking for better city-planning, safe and separate bike lanes. We also suffer from the anxiety of climate change, but we are at least doing something about it. In Copenhagen and Amsterdam forty percent commute within the city on bikes. Try to adopt that number to other huge cities in the world and you have an existing utopia.

What would happen to car sales and oil usage if other cities followed that example? It would be revolutionary. And here’s the conflict. The car industry is at the center of our economic system. They have money and investments to lose. For the car owners and commuters that have become so invested in their lifestyle, a change is painful. It’s a conflict that interests me. That’s why I’ve decided to take on this project. A project of passion.

I am proud to be part of a growing global movement. I hope that everyone that takes part in this campaign will feel the same and happily jump on their bikes, spread the word and donate.”

And even though the fundraiser was just launched yesterday, more than one hundred individuals have already donated to this worthwhile film. Here is a trailer for the upcoming pro-bicycle movie:

How You Can Help Bikes Win

For more information on how you can support, get involved with or help spread the word about this promising documentary project, please visit the Kickstarter, twitter of facebook site for Bikes vs Cars.