Many local communities are looking at ways that they can incorporate green technology into their city’s municipal infrastructure. One impressive success story is the Tindo electric bus in Adelaide, Australia. Although many cities have experimented with using hybrid or electric technology in their public transport systems, this vehicle is the world’s first 100% solar-powered electric bus; and not only is it powered by the sun, but this service is also offered free of charge. 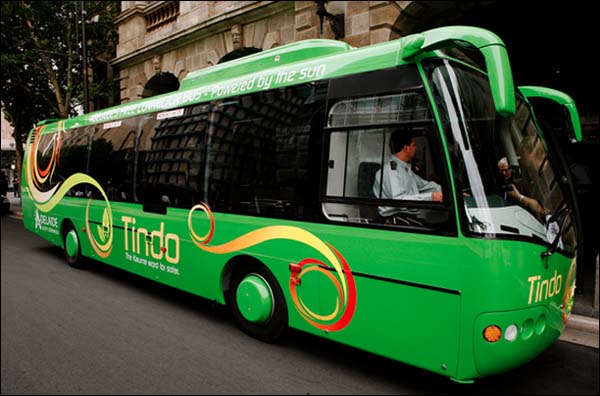 Named after an Aboriginal word for “sun”, the Tindo was designed to be part of the Adelaide Connector Bus service, a free service run by the City Council. What makes the bus unique from other solar-powered vehicles is that there aren’t any solar panels physically on the vehicle. Instead, the car received electric power from solar panels located on the city’s central bus station. These provide enough energy to allow the bus to run freely from the city centre and the North Adelaide, and will also offer air conditioning and WiFi to its 40 passengers.

The Council commissioned this bus from a New Zealand company called Designline International, as part of a wider green initiative. Adelaide residents have shown a keen interest in reducing emissions, with many seeking out hybrid cars like the Mitsubishi Mirage, or choosing to go electric, while many residents already choose to carpool or bicycle on their commute as well. In the City Council’s Strategy Plan for 2012-2016, further plans to make the streets more sustainable are outlined. This includes a more comprehensive network of footpaths and bike trails to enable commuters to get around without a car.

The latest figures from 2010 showed that 36% of the city’s carbon emissions came from transportation. Although residents are turning to hybrids like new Ssangyong cars and the ever-popular Prius to reduce personal emissions, the city’s public transportation network has helped further reduce emissions. The Tindo has no combustion engine, which makes it a zero emissions vehicle. Its regenerative braking system also saves an additional 30% of energy consumption. In its first year alone it’s estimated that the solar-powered bus saved over 70,000 kg of carbon emissions and 14,000 litres of diesel.

Due to its unique solar photovoltaic charging system and ability to travel over 200 kilometres between recharges, this vehicle has received a great deal of attention from the wider green community. It’s been featured in the Solar City Convention Spirit Festival, Global Green Challenge, and Heritage Bus Tour. Although solar busses can be found in Austria, China, Wales, and India, they have yet to become a widespread public transport solution. Of these various solar busses, the Tindo is still the only one which is completely powered by the sun.

The Tindo’s success shows that public transportation can be further improved to reduce a community’s carbon emissions while improving the residents’ way of life at the same time. Its adoption has helped make Adelaide one of Australia’s most green-friendly cities, an attitude mirrored by its residents.

This article was supported by www.carsales.com.au
bus image via Adelaide City Council
Like us on facebook
Address: