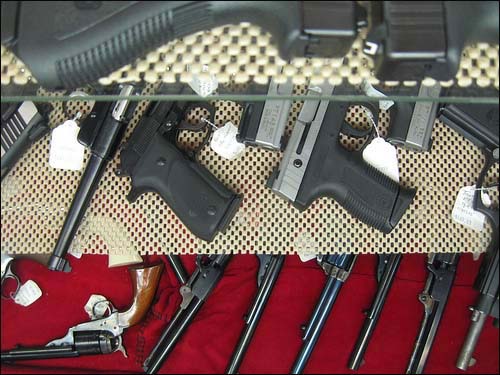 California is once again leading the nation in enacting more sensible gun control regulations. This week the state Congress is continuing to draft legislation that would create a comprehensive database for the purchase of ammunition, as well as require all guns to remain locked up when they are not in use, and extend how long a person is prohibited from owning weapons after they have made violent threats against someone.

The California state Senate has already approved a bill that bans all semi-automatic rifles with detachable magazines, and mandates that those who own high-capacity magazines dispose of them. It is unclear whether or not Governor Jerry Brown will sign any of these proposed bills into law.

Here is an update from the San Jose Mercury News on the status of where these various pending weapons related regulations currently stand:

Senate Bill 374 by state Senate President Pro Tem Darrell Steinberg, D-Sacramento, bans all semi-automatic rifles with detachable magazines and retroactively requires ownership records for all guns. It passed the state Senate 23-15 on May 29 and will be heard Tuesday by the Assembly Public Safety Committee.

Senate Bill 53 by state Sen. Kevin de Leon, D-Los Angeles, requires a background check for all ammunition purchases and licenses for all sellers. It passed the state Senate 23-15 on May 29 and is now pending in the Assembly Appropriations Committee.

Senate Bill 47 by state Sen. Leland Yee, D-San Francisco, prohibits so-called bullet buttons and other devices used to circumvent the state’s assault-weapons ban and allow fast reloading. It passed the state Senate 23-15 on May 29 and is to be heard Tuesday by the Assembly Public Safety.

Senate Bill 396 by state Sen. Loni Hancock, D-Berkeley, outlaws magazines holding more than 10 rounds, even those that were grandfathered in under the state’s assault-weapons law. It passed the state Senate 25-14 on May 29 and is to be heard Tuesday by the Assembly Public Safety.

Assembly Bill 48 by Assembly member Nancy Skinner, D-Berkeley, creates a state database to track all ammo purchases and makes it illegal to build your own high-capacity magazines. It passed the Assembly 46-26 on May 29 and is to be heard Monday by Senate Appropriations.

Assembly Bill 711 by Assembly member Anthony Rendon, D-South Gate, would ban use of lead ammunition by California hunters. It passed the Assembly 44-21 on May 16 and is now languishing in state Senate Appropriations’ suspense file.