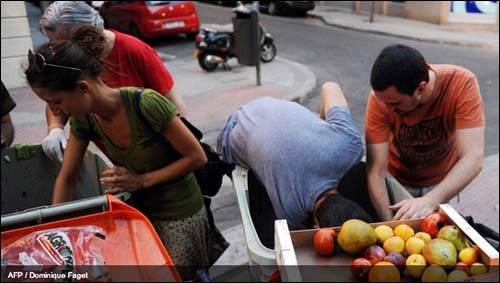 Incredibly, some cities in Spain are now fining people who search through dumpsters for food the equivalent of nearly $1000; while elsewhere, other communities are beginning to understand the power inherent in salvaging and reusing resources gleaned from our garbage.

Varying Views on the Gift Economy

Brooklyn’s Prospect Park neighbors have an unspoken agreement: give freely and you shall receive freely. You can walk towards the coffee shop and easily find clothes, furniture, books, and toys on the street along the way. If you want to take anything, you can, as long as you then put out stuff of your own for others to take. Saturday mornings are the peak of abundance — everyone sits out on their stoops and sells their old junk for cheap prices or just gives it out for free. On top of the enjoyment they find in communal living, these traders share the belief that generosity is the most sustainable and rewarding lifestyle.

However in Spain, such understandings are not so common. I might occasionally find some outdated books or edible fruit from grocery stores in my neighborhood, but it is still rare; the idea of leaving things on the street for others is highly suspicious, and people prefer to donate to churches or social centers. In addition, looking through garbage is stigmatized anywhere you go. Those who dig through other people’s waste are often thought to be dirty and classless criminals.

A Hippopotamus in My Garbage?

According to the European Commission of Statistics, each individual in Spain generates 1.5 tons of waste in one year, excluding mineral waste. An average hippopotamus weighs that much, as does a typical car. That’s a lot of garbage, and a lot of it can be rescued and reused. But since 2009, dumpster diving hasn’t been an option for those of us living in Spain. Not only because it’s stigmatized, but because there is actually a law against it.

Madrid was the first province to implement a law that forbids rummaging through garbage bins. Others have followed, such as the southern province of Almería, which in this past year has fined over 40 people. In Spain’s capital city, an individual could be forced to pay a penalty of 750 euros, or $981, simply for searching for food in a trash bin.

“I refuse to live in a city and in a society in which I am forced to accept that there are people who go rummaging in the garbage to eat. The Town Hall has to ensure the sanitary conditions of the city. Unfortunately, the destruction of a million jobs in one year is creating new social profiles, but the social service network offers resources for them.”

In response to this, Raquel López, spokesperson of an oppositional party, stated that she considers the fine “scandalous, embarrassing, and unsupportive”.  In response to Botella, she raised this pertinent question:

“Maybe one should ask, why some citizens of our city see no other option than to go inside a garbage bin in order to subsist. Unfortunately, not only are we talking about the homeless but also about a lot of elderly people who find they have to look through garbage to get clothes or other utensils.”

Impoverished immigrants are not the only people who scavenge in the dumpsters. While the economic crisis and the exorbitant 26% unemployment rate here in Spain is now forcing many to find their daily necessities in the cheapest way possible; others have historically turned to dumpsters as a more sustainable alternative to consumerism and wasteful living. It’s unfortunate that this group of people is left out of the debate, because we could all benefit from sharing our resources, as well as being more thoughtful of what we throw away.

Fining dumpster divers surely does not seem like a measure that would either help our economic situation or create more sustainable alternatives. Does the Spanish government just want us to be poor and prodigal?