This week the California State Senate approved seven related gun control bills, which include universal background checks for anyone who wishes to purchase ammunition. People in the state who have a criminal record, severe mental illness, or a restraining order filed against them, would also be disqualified from owning guns. More than 9 in ten people across the United States already strongly support universal background checks for all weapons purchases.

In addition to mandating that all ammunition sales in the state be safely regulated, the proposed gun control legislation also allows the Department of Justice to maintain a list of qualified buyers that could be checked by ammunition dealers in California. Initially anyone who wants to buy bullets would pay a fifty dollar fee, and would then have to show a valid ID thereafter. 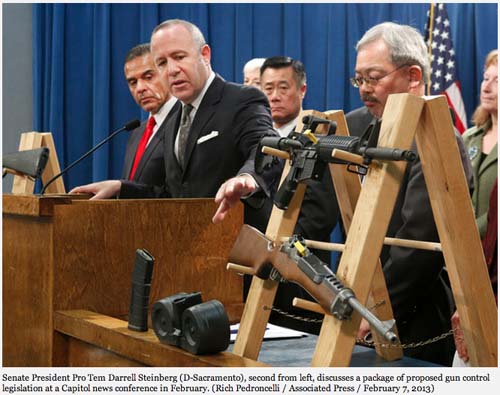 The author of one of these gun safety reforms, Sen. Kevin De Leon (D-Los Angeles), explained that the goal of SB 53 was:

“…to ensure that criminals and other dangerous individuals cannot purchase ammunition in the state of California. To purchase a product that has the potential to maim or kill another human being you can [now] walk into a gun store, no questions asked; I think that’s a little outrageous.”

Bills were also approved in the California Senate that forbid the sale, purchase and manufacture of semiautomatic rifles which allow detachable magazines, as well as ban all ammunition cartridges that contain more than 10 bullets. All of the proposed legislation will next be considered in the State Assembly.