Rachel Maddow Bombshell Documentary: Hubris, How Bush Lied the US into War

Those of us who do not remember history are forever condemned to repeat it. Could a movie prevent our nation from waging another deadly, unnecessary war? Rachel Maddow’s new documentary on MSNBC, HUBRIS: Selling the Iraq War, might be able to accomplish exactly that. 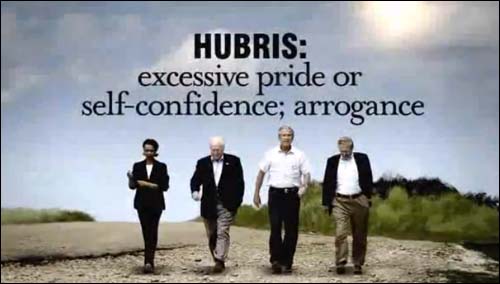 Just ten years ago, on March 19, 2003, George W. Bush began a massive occupation of Iraq that would kill hundreds of thousands of people, and would cost well over $3 trillion dollars. The two flimsy reasons that Bush used to justify that war were ultimately proven to be lies; there were never any weapons of mass destruction in Iraq, nor any significant links between Saddam and Al Qaeda.

It is now public knowledge that the Bush administration openly lied our country into war, but somehow nobody seems to talk about it very much. The many deceptive fallacies, war crimes, and pervasive torture perpetrated and promoted by Bush and his minions seem to have just fallen down into a lost memory rabbit hole; but Maddow, with the help of David Corn, MSNBC and Michael Isikoff , is now helping to shed some light upon these outright government frauds. In Hubris, Rachel Maddow chronicles the blatant mendacity that led our nation into an unnecessary war of choice in Iraq.

Bush openly swindled the nation into war under the pretense of non-existent weapons of mass destruction. The rationale for that deadly catastrophe was a deliberate hoax. Unfortunately this powerful documentary can not prevent the horrific debacle that was the Iraq war, but perhaps this well researched movie will help remind us to severely examine claims made by boisterous war hawks, when they loudly demand more war and killing.

Is it possible for our country to learn from our past mistakes, and now avoid being deceived into yet another unjust bloody invasion? Recently elements from the Obama administration have been leaking dubious cables and information concerning alleged chemical weapons stockpiles in Syria, in the context of justifying also invading that nation. Does this story sound familiar?