Late last month the Kulluk Shell oil rig was run aground on the pristine shores of Alaska’s Kodiak Island while it was being towed to Seattle during a ferocious storm. Why would anyone even attempt towing something as dangerously precarious as an oil rig in the middle of a massive winter storm? The reason that the mobile offshore drilling unit was being moved out of Alaska at the end of December, in spite of hurricane force winds and treacherous 40 foot waves, was because Shell was trying to avoid paying a few million dollars in taxes. 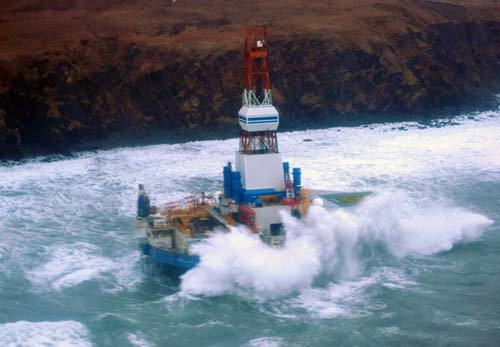 Waves crash over the mobile offshore drilling unit Kulluk where it sat aground on the Alaska coast on January 1, 2013. 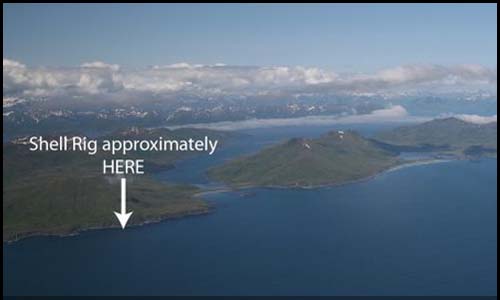 Even though large waves continue to pound against the untethered rig, presently it still remains upright, and is not yet leaking any of the 150,000 gallons of petrochemicals that it currently contains. The Alaska Dispatch reported that  the reckless decision by the multi-national company to attempt to move the Kulluk in such dangerous conditions was motivated by money:

“According to Shell Operations Manager Sean Churchfield, the grounding occurred during a fierce storm that produced near-hurricane-force seas with waves exceeding 40 feet at times and wind gusts of 50 knots and higher.

‘The conditions last night were very poor,’ Churchfield said. ‘It was a really unpleasant night to be out on the sea.’

A Shell spokesman last week confirmed an Unalaska elected official’s claim that the Dec. 21 departure of the Kulluk from Unalaska/Dutch Harbor involved taxation. City councilor David Gregory said Shell would pay between $6 million and $7 million in state taxes if the Kulluk was still in Alaska on Jan. 1.

Shell’s Curtis Smith said in an email last week that the decision involved financial considerations. The rig had been moored in the Aleutian Islands port following several months on an oil exploration project in the Arctic Ocean.”

It should be noted that the six to seven million dollars that Shell was trying to avoid paying in Alaska state taxes equals roughly 0.1% of the enormous profits they made in the third quarter of 2012 alone. This completely avoidable disaster once again illustrates Shell’s complete and utter disregard for basic safety, as well as protecting our environment.