When it Comes to Labeling GMO Food, Monsanto Prefers to Flip-Flop 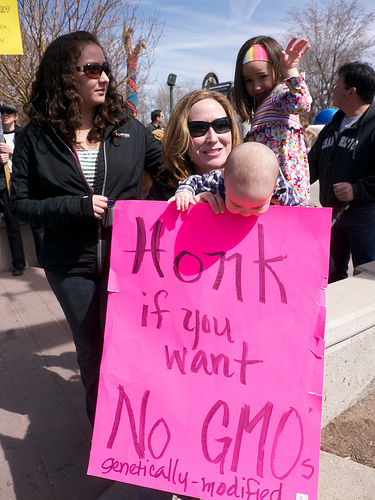 No one could blame Monsanto, one of the biggest purveyors of GMO food products, for wanting to squash California’s Proposition 37. The law is primarily focused on forcing food vendors to disclose whether or not any genetic modification took place to grow and produce the product they’re about to buy. Because such practices are viewed negatively by a large section of the public, it could be argued that it’s in Monsanto’s best interest to fight the legislation.

In the late 1990s, legislative work was being done in the United Kingdom — and around Europe — to require the labeling of GMO foods. Such legislation went into effect in the European Union in 1997. Since then, producers of engineered foods are required to label each genetically modified ingredient or component on packaging containing GMO products. The biggest problem with modified foods is that you would need a legal DNA test to even know that it was genetically modified.

The campaign that eventually led to the passage of such legislation was helped, rather than harmed, by Monsanto’s own efforts. The company ran television ads in the United Kingdom that related to customers. Viewers were informed that the would “probably” appreciate proper labeling of GMO ingredients on their packaging so that they might make the best decision when shopping for groceries. Obviously, the legislation passed — and Monsanto is still around.

In California, a Different Position on Requiring Labeling

Monsanto seems to have forgotten its work in the 1990s. Or perhaps the company assumed that this new decade calls for a new position? California’s Proposition 37 demands labeling of GMO ingredients on packaging, and the law itself currently maintains a public approval rating of 65%. Consumers are overwhelmingly in favor of this legislation, just as they were in the 1990s European Union. This time, however, Monsanto has a bone to pick with voters.

The company has decided that the risks of GMO labeling in the United States simply outweigh the rewards. To that end, the company has spent $4.3 million to date in order to change the tides of public perception and ostensibly protect its own business here at home.

Perhaps even worse than the company’s efforts to stem the tide of public approval for Prop 37 is its public relations strategy. Rather than encouraging a healthy debate over the matter, Monsanto has confused the public with incorrect facts, figures, and arguments, in an effort to cloud their judgment on the issue. Deception is no way to win hearts and minds, and it’s worth noting that the company’s efforts have had a negligible impact on the law’s popularity.

Efforts Would be Better Spent Elsewhere

Monsanto’s anti-labeling push this electoral cycle hasn’t made much of a difference in California, at least for its own position. It has, however, motivated groups in favor of Prop 37 to work harder on fundraising, awareness, and get-out-the-vote efforts. The company’s purely corporate tone has actually served to undermine its efforts.

And its $4.3 million spent in California has worked to undermine its own charitable giving programs that date back more than 50 years. Monsanto is actually no stranger to helping the public, and perhaps the company should remember its roots in this area during future election cycles.