While commenting on the 2012 presidential race in the Maddow Blog recently, Steven Benen suggested that in this election season it now seems that “maybe you can just make stuff up”. From fictional tales of spastic tubes and forcible legitimate rape, many strange lies and bizarre falsehoods have continued to spew out of the Republican Party propaganda machine.  In today’s installment of “maybe you can just make stuff up”, we look at an entertainer who appears intent upon dividing our nation. 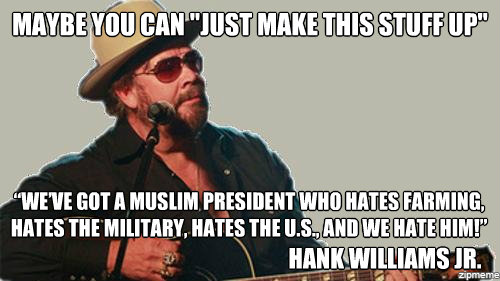 The image of Hank Williams is one of a good ol’ boy southerner who likes to hunt and fish, and is deeply committed to his spiritual faith, his family and community. During a musical performance at the Iowa State Fair this year on Aug. 17, Williams stated:

“We’ve got a Muslim president who hates farming, hates the military, hates the U.S., and we hate him!”

Even though such an overtly racist and vitriolic statement clearly has no merit in truth — to set the record straight, FactCheck.org refuted these malicious lies:

Another e-mail claims that Obama “is a Muslim,” attended a “Wahabi” school in Indonesia, took his Senate oath on the Koran, refuses to recite the Pledge of Allegiance and is part of an Islamic plot to take over the U.S. Each of these statements is false.

What amazes me about Hank’s fatuous remark is how it illustrates a very odd alliance between billionaires, right-wing members of the middle class and poor conservatives. What seems to unite these disparate groups is the issue of abortion. Whenever I question economically disenfranchised or middle class southerners why they choose to vote republican, abortion is always given as the reason. A singular issue clouds seeing a much bigger picture of our society.

Why Vote Against Your Own Interests?

What is most confounding is that these same good ol’ boys willingly sacrifice so many vital issues which directly impact them and their families every day, just to preserve one polarizing social issue. The Republican Party is attempting to hold these people hostage with the issue of abortion, while working to subvert legislation that addresses more relevant economic concerns. These politicians have become entrenched in policies that are notoriously bad for the environment, education, health, workers rights and society as a whole.

Republicans’ obsession with passing anti-abortion laws comes at the cost of providing basics, like investment in infrastructure, educational opportunities and a healthy environment. They readily sacrifice job creation, clean air and unpolluted water for the opportunity to control the bodies of women. These short-sighted policies are driving poverty deeper into many of our communities.

Is it possible any longer for popular opinion to shift the extremist Republican agenda to one that actually serves the people rather than just the rich and corporations? Is it plausible that a collective uproar could create higher standards for healthcare, education and our shared environment? Surely these basics are things that even a country boy like Hank could love and appreciate?