Last weekend thousands of Ron Paul supporters gathered in Florida to celebrate the former Republican presidential candidate. Even though the politician garnered many delegates during this year’s election campaign, Paul was not invited to speak during the official Tampa convention; the snub was perhaps caused by his refusal to endorse Mitt Romney. The fact that the iconoclast staunchly refuses to support a secretive billionaire like Romney does make the Texas libertarian even more appealing. 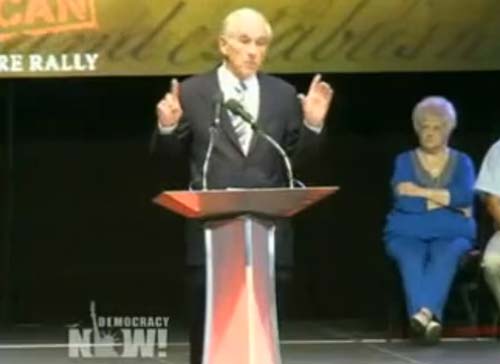 Here is a brief excerpt from Ron Paul’s speech in Florida this weekend:

“To me the three problems that we have to face — number one that I see as the problem, that if we solved it, it probably would solve most of the other ones, and that is the attack on personal liberty. If people truly understood what personal liberty means, that you have self-ownership, that you have a natural god-given right to your life; therefore you have a right to your liberty, and we defend all life and all liberty regardless of our judgement about how people are using that liberty…”

As I was listening to the politician wax eloquently about the importance of personal liberty, what he said made a tremendous amount of sense on the surface, until I considered his extreme anti-abortion rights position. Paul wants to make all abortion access illegal, but somehow celebrates personal responsibility and liberty? Oh Ron Paul, indeed you are such a convoluted conundrum.