Home » Blog » Economy » Romney & Ryan: Going Back to the Future that Destroyed Our Nation’s Economy?

Just as newly christened potential vice presidential candidate Paul Ryan told his supporters that he was “thrilled to be a part of America’s comeback team”, the Obama campaign released another endearing nickname for the political duo: “The Go Back Team“. It is inexplicable why these Republicans keep desperately clinging to the belief that the miserably failed trickle down economics fraud that already drove our country off a cliff is still somehow a viable solution. 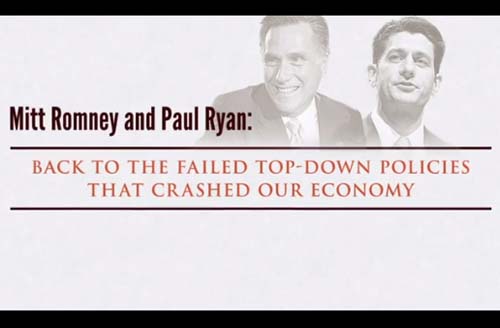 The flawed policies that both Paul Ryan and Mitt Romney are promoting are feeble attempts to go back in time, to an era when women did not have control of their bodies, social security did not exist, and millions of poor and minority citizens were denied the right to vote. Romney may be best known for promoting more tax cuts for the rich while sequestering much of his enormous wealth in secret offshore accounts, as well as continuing to hide his tax returns; but he does also claim to support many of his new running mate’s radical ideas.

Ryan’s proposed budget totally guts medicare, turning it into a voucher system, slashes college Pell Grants, and also privatizes social security. He co-sponsored a bill that could ban many common forms of birth control, including the pill, and could also criminalize all abortions, even in cases of rape or incest. The politician also supports allowing states to prosecute women who have abortions and doctors who perform them.

I do not welcome the failed slash and burn economic plans proposed by these people. I also do not welcome the mandatory transvaginal ultrasounds that these clueless dudes want to force upon us. Please register and vote this November.