The American Dream is a Lie: Days of Destruction, Days of Revolt

Home » Blog » Economy » The American Dream is a Lie: Days of Destruction, Days of Revolt

One of the most significant books published this year is Days of Destruction, Days of Revolt, a gripping graphic novel reportage mix which skillfully exposes the extreme exploitation and poverty that flourishes on the disenfranchised burned out edges of our nation. This brutal compelling work is a collaboration between Pulitzer Prize winning journalist Chris Hedges, and the revolutionary cartoonist and foreign correspondent, Joe Sacco.

Sacco, who has worked in many devastated war-torn foreign locales, expressed his utter disbelief at the horrific destitution that he witnessed across our land while researching this book:

“I was shocked by what I saw in the States; I had spent so much time abroad, and to see these parts of the United States that reminded me of places I’d been abroad—it was sort of a wake-up call, at least to me.” 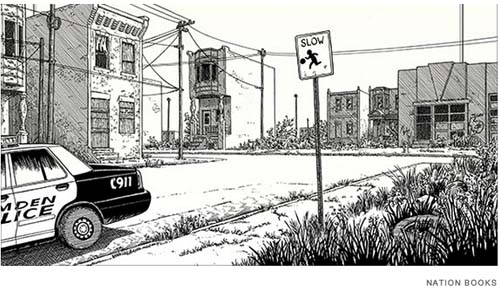 Joe Sacco’s insightful comic illustrations help to document forgotten communities across our nation that have been exploited and devastated by capitalism run amok.

The journalists traveled from the western plains, meeting with tribes of Native Americans, the first population whose land and people were systematically sacrificed upon the altar of empire and predatory capitalism. The book then chronicles the casualties from our country’s decaying manufacturing industry, struggling coal miners, and agricultural workers laboring in our produce fields, shedding light and humanity upon these abandoned and impoverished communities.

Capitalism’s fierce grip on our country’s throat is tightening, and more of us are falling by the wayside each day. The volume’s introduction shares some disturbing statistical information concerning the state of our nation — who says that the USA is not number one? Among all industrialized nations we now have the:

Revolt is Our Only Hope

But this book is not just doom and gloom, poverty and despair — it closes on an uplifting note of hope and optimism. The end of the journey takes us to New York’s Zuccotti Park last fall, to witness the birth of the Occupy Wall Street movement, and the growing number of organized voices calling out for change.

Here is an excerpt from Chris Hedges explaining the focus of Days of Destruction, Days of Revolt:

“The devastation on Pine Ridge, in Camden, in southern West Virginia, and in the Florida produce fields has worked its way upward. The corporate leviathan has migrated with the steady and ominous thud of destruction from the outer sacrifice zones to devour what remains. The vaunted American dream, the idea that life will get better, that progress is inevitable if we obey the rules and work hard, that material prosperity is assured, has been replaced by a hard and bitter truth. The American dream, we now know, is a lie. We will all be sacrificed.

The virus of corporate abuse — the perverted belief that only corporate profit matters — has spread to outsource jobs, cut the budgets of our schools, close our libraries, and plague communities with foreclosures and unemployment. This virus has brought with it a security and surveillance state that seeks to keep us all on a reservation. No one is immune. The suffering of the other, of the Native American, the African-American in the inner city, the unemployed coal miner, or the Hispanic produce picker is universal. They went first. We are next. The indifference we showed to the plight of the underclass, in Biblical terms, our ‘neighbor’, haunts us. We failed them, and in doing so we failed ourselves. We were accomplices in our own demise. Revolt is all we have left. It is the only hope.”