A new report has been published which compiles detailed information about the enormous amount of money that is being hidden by billionaires in offshore accounts. The research, The Price of Offshore Revisited, shows that over 21 trillion dollars, more than the total combined GDPs of both the United States and Japan, are being sequestered out of sight into the legally murky offshore economy. The super elite are using every available resource to exploit loopholes in cross-border tax rules to avoid paying their fair share. 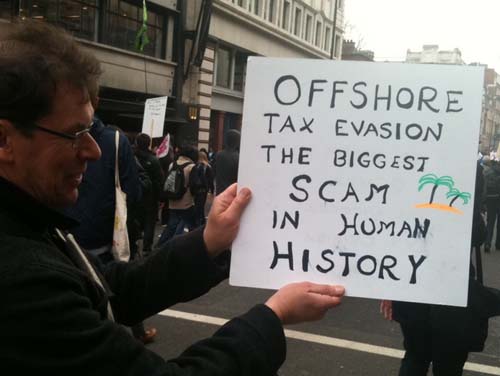 It is difficult to gauge exactly how many trillions have been smuggled out of nations into secretive jurisdictions, such as Switzerland and the Cayman Islands. As the bloated plutocracy consolidates more and more wealth, hundreds of billions of tax dollars are being stolen from scores of countries, robbing them of the ability to pay off their national debt, or invest in their infrastructure and education.

This multi-trillion dollar global financial shell game exists with the eager help of private banks, who fight with each other to attract and hide more assets from the super wealthy elite.

Britain’s Guardian highlighted information contained in the recent Tax Justice Network study, which illustrates that these mounds of hidden wealth actually make the massive income inequality gap between rich and poor much larger than the growing economic chasm already appeared:

“The sheer size of the cash pile sitting out of reach of tax authorities is so great that it suggests standard measures of inequality radically underestimate the true gap between rich and poor. According to Henry’s calculations, £6.3tn of assets is owned by only 92,000 people, or 0.001% of the world’s population – a tiny class of the mega-rich who have more in common with each other than those at the bottom of the income scale in their own societies.

‘These estimates reveal a staggering failure: inequality is much, much worse than official statistics show, but politicians are still relying on trickle-down to transfer wealth to poorer people,’ said John Christensen of the Tax Justice Network. ‘People on the street have no illusions about how unfair the situation has become.’

TUC general secretary Brendan Barber said: ‘Countries around the world are under intense pressure to reduce their deficits and governments cannot afford to let so much wealth slip past into tax havens.

Closing down the tax loopholes exploited by multinationals and the super-rich to avoid paying their fair share will reduce the deficit. This way the government can focus on stimulating the economy, rather than squeezing the life out of it with cuts and tax rises for the 99% of people who aren’t rich enough to avoid paying their taxes.”

Woody Guthrie’s insight that some men will rob you with a six-gun, and some with a fountain pen, seems very much to apply here.