The most egregious criminal financial fraud of all time is now unfolding before our eyes. A handful of corrupt banks have been intentionally manipulating global interest rates, also known as LIBOR, which stands for London Interbank Offered Rate.

When it is not being illegally twisted by bankers for their own monetary gain, LIBOR is meant to gauge the average interest rate that banks charge each other to borrow money. The measure is also used as the basis for nearly all other lending rates, from what we pay for student loans to home mortgages. It is estimated that over $300 trillion in global monetary transactions are linked directly to LIBOR. 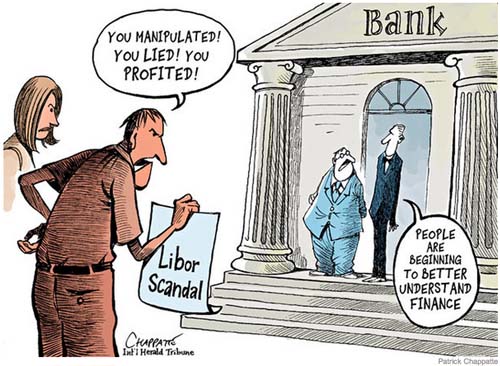 This enormous financial fraud perpetrated by a few billionaires impacts what hundreds of millions of us pay each month for credit and loans, as well as what municipalities and retirees are able to earn on their investments. This expanding scandal has exposed that for many years banks have been colluding together to slightly tweak the interest rates for their own monetary benefit, and to the financial detriment of the rest of us.

Three major US banks which actively participate in setting the LIBOR are: JPMorgan Chase, Bank of America and Citigroup. The Christian Science Monitor reported that the chief executive officer of the British bank Barclays has already resigned as a result of this widespread corruption, and the institution has been fined for manipulating the LIBOR as far back as 2005:

“…Barclays will pay half a billion dollars in fines for efforts to manipulate a benchmark interest rate. Other banks must have been involved, though, and the full range of the scandal has yet to emerge.”

This week Rolling Stone reporter Matt Taibbi spoke with Democracy Now about the extensive LIBOR financial fraud. They discussed why this pattern of systemic corruption by the 16 international banks implicated in the rigging of this key global interest rate is the biggest insider trading criminal scandal of all time:

The founder of the Consumer Financial Protection Bureau, Massachusetts Senate candidate Elizabeth Warren, explained in a recent Washington Post editorial why this systematic financial corruption is so rampant, and why stronger regulations are so vital for a healthy economy:

Going forward, the rules would be changed so that Libor is calculated on actual borrowing costs, not estimated or claimed costs. And enforcement agencies would have the resources they need to launch investigations, to fight the armies of private lawyers the banks hire and to prosecute the law-breakers.

But the heart of accountability lies deeper. It rests on acknowledging that we cannot trust Wall Street to regulate itself — not in New York, London or anywhere else. The club is corrupt. When Mitt Romney says he will move to repeal all of the new financial regulations, he supports a corrupt system. When members of Congress grill regulators for being too tough on Wall Street and slash the budgets of the regulators charged with overseeing Wall Street, they prop up a corrupt system.

Financial services are critical to the economy. That’s why everyone — every family and every business — has a stake in an honest system. The fantasy that reducing oversight of the biggest banks will make us safer is just that — a dangerous fantasy. The Libor fraud exposes rot at the core. Now, who will stand up to fix it?”