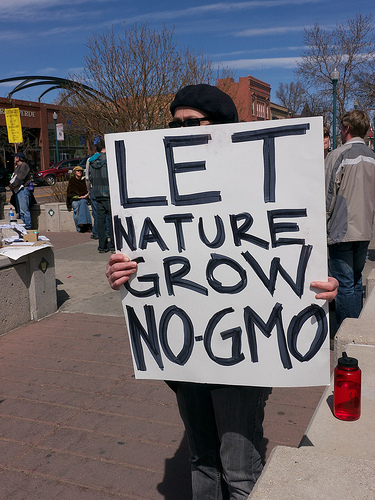 The right of consumers to know whether the foods they eat have been genetically engineered is moving closer to being law. This November the California Right to Know Act will appear on the state ballot as Proposition 37. If passed the measure would be the first U.S. law that requires GMO foods to be labeled.

Support for this reform in California is overwhelming, with 91% of those polled in favor of the initiative. Backing crosses all political parties. Perhaps Californians see GMO labeling as a health and consumer rights issue that transcends politics?

Many state food and consumer groups endorse the measure, including California Certified Organic Farmers and the California State Grange. The initiative also has the support of national consumer rights organizations, including the American Public Health Association, Consumer Federation of America and Public Citizen. Organic food companies are speaking out as well, including Lundberg Family Farms, Organic Valley and Eden Foods.

For once, the winds of change in California strongly parallel those in the rest of the nation. Several national polls conducted between 2010 and 2012 show that nine out of ten Americans back GMO labeling. If Prop 37 passes, this spotlight on genetically engineered food could start a legislative domino effect in other states.

This may be new ground for the U.S., but we are actually behind the rest of the developed world when it comes to labeling genetically engineered food. Europe, China and Japan already require labeling that informs the consumer whether a product is GMO; India will join them in 2013. This means most of the world’s population can make more informed decisions about the potential risks of the food they buy for themselves and their families.

Labeling is more straightforward than the political decision to do so. Genetically engineered foods have had their DNA tampered with in order to produce a hardier, more prolific, or otherwise supposedly superior crop. There is no gray area as to whether the genes have been modified.

In the GMO process, foreign DNA from other plants, animals, bacteria, or even viruses is inserted into the target plant DNA. The target crop then makes foreign compounds that it could not produce on its own. These genetic hybrids are sold in the U.S. as regular produce and other consumables. Today many families are unknowingly eating apples that contain foreign viral DNA.

Organic farmers and other producers who want to demonstrate that their products are not engineered can obtain a dna test. The test is a molecular screening that can detect the presence of GMO such as the Roundup (RR) gene. The test results provide an additional guarantee to consumers, and also reassures a farmer that the supplies she buys, such as seeds, are GMO-free. From field to table, the integrity of our food supply begins with information.