Steven Smith is a true innovator. He was able to see what others simply could not — that behind 10 million pounds of trash, waste and rubbish, was a true community treasure.

Ten years ago Smith acquired Oak Point Property, a polluted 28 acre area that had been a sprawling illegal dump, as well as a dangerous area for criminal activity. ABB, an international electrical giant and Smith’s former employer, had relinquished plans to develop a power plant on the site, and eventually the property ended up in bankruptcy. No one was willing to touch the property due to its shady reputation, legal issues and millions in claims. 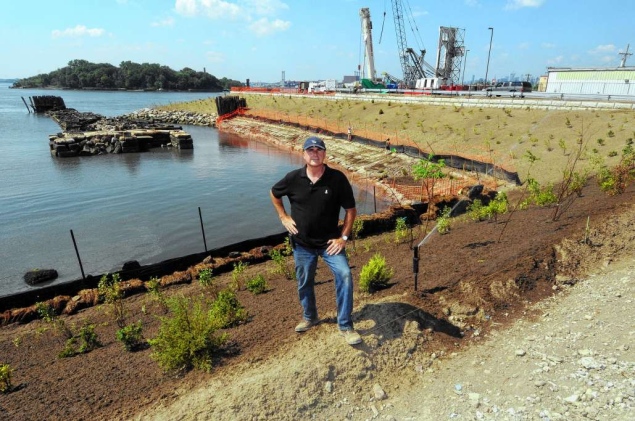 However Smith saw a gem in the making. As a professional developer and engineer, he immediately recognized great potential. Oak Point, despite all of its shortcomings, was still a massive area of undeveloped private property. In New York City this is nearly unheard of. Smith quit his job and used his savings to become Oak Point’s trustee.

After years of legal bickering and tremendous environmental cleanup costs, Oak Point is about to be launched as a fresh food allocation center. Not only is this a wonderful outcome for the urban ecosystem, it is great for economics as well, as Oak Point now holds the potential to bring hundreds of jobs to the South Bronx.

This city will host is annual Neighborhood Achievement Awards, and Oak Point Property will be recognized as the Bronx Small Business of the Year. Once a filthy dump site, the area has now been transformed into a valuable real estate that will give back to the local community.

Smith’s original plan was to create a power plant on the land, but the local residents cried out against this. In 2008, after listening to the neighbors and considering input from regional officials, the decision was made to instead focus primarily on food.

The pay off has been massive. After completing the final part of the incredible cleanup, Smith agreed to a deal to sell 12 acres to Jetro, a food wholesaler; the company is now enjoying its new distribution center in a lovely setting nestled by trees, in the same area where not long ago was nothing but piles of waste.

Steven Smith still owns one remaining parcel, and is working on a three-story dispersion center with a revolutionary rooftop greenhouse, which is planned to open in 2013. Local environmentalists and neighborhood residents are thrilled that the center will focus on the “go local” farm movement; the project is currently seeking farmers that offer local farm produce, dairy and meat.

Thanks to this kind of innovative thinking, other developers are investigating potential options formerly never considered. There are now some companies looking into doing similar dump transformations in the tri-state area. One business leader is even flirting with the concept of taking over the Rockville Public Dump in order to create more Rockville Centre Apartments. Although these deals are still in the works, it is inspiring to see such an encouraging trend.