Two years ago the worst onshore oil spill in United States history was caused in Michigan by a Canadian company named Enbridge. Over one million gallons of tar sands crude spewed out of a ruptured pipeline into the Kalamazoo River, and the attempted clean up has only just been completed, sort of.

The National Transportation Safety Board has released a report analyzing the extreme negligence that led to this environmental disaster, and found that the company knew five years beforehand that this burst pipeline was sorely in need of repair, but did nothing to fix it. NTSB Chairwoman Deborah A.P. Hersman explained that their detailed investigation into the catastrophic rupture of the 30-inch pipeline revealed several major problems:

“Pipeline operators are required to have an integrity management program, which continually assesses and addresses the safety risk on their pipelines, particularly those in high-consequence areas. In 2005, Enbridge detected the very defect that led to this failure … Yet for five years, they did nothing to address the corrosion or cracking at the rupture site – and the problem festered.” 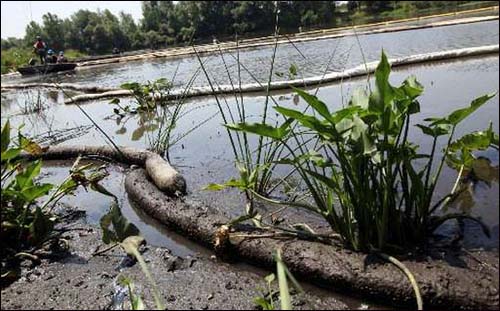 This is the heavily polluted Kalamazoo River in 2011, more than a year after the horrific Enbridge tar sands oil spill disaster.

Not only was Enbridge  fully aware of the cracks and damage to their pipeline, it took the company over 17 hours to realize that their pipe had burst. During this time over 600,000 of toxic crude was pumped directly into the formerly pristine Michigan waterway. The report also found that the company had poorly trained workers and no plan or resources in place to cope with a tar sands oil spill.

What makes this massive spill so incredibly expensive and damaging is that the pipeline was carrying heavier tar sands oil, which does not float to the surface of the water, but quickly sinks to the riverbed bottom. Once it has polluted a river, it is nearly impossible to remove. Even though petrochemical companies make billions each year, no investment has been made into developing effective technology to deal with such inevitable catastrophes.

Any major oil spill is environmentally disastrous, but tar sands oil spills are much more destructive. Will this enormous toxic disaster impact support for building another huge tar sands pipeline in the United States?

image is via the Detroit Free Press