Part of what makes San Francisco such an attractive (and unfortunately very expensive) place to reside is that it is a beautiful livable city — biking and pedestrian infrastructure improvements over the last decades have helped to positively transform our town into a much more pleasant urban environment. The SF Bicycle Coalition announced recently that, according to the official citywide bicycle count, over the last five years bike ridership has increased a whopping 71%. 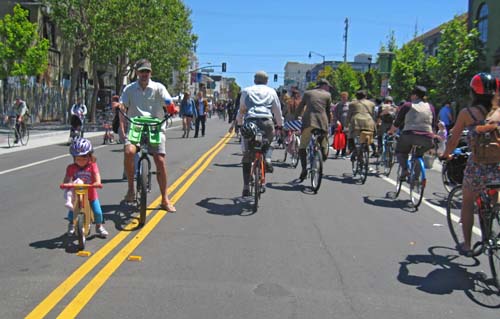 Part of the reason that biking has increased so dramatically is that San Francisco’s bike lanes, related infrastructure and public spaces have been greatly improved. Many of these municipal investments were hard-fought individual battles; I vividly remember how people howled that tearing down the hideous earthquake damaged Bayshore freeway would destroy business in Chinatown, and that bike racks on our public buses and closing Market Street to automobile traffic would never happen. 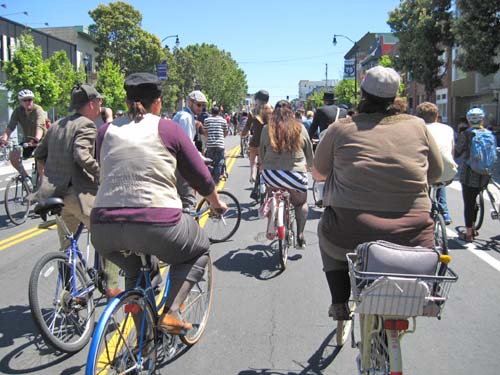 These intelligent urban planning decisions that prioritize the use of public space for people, instead of cars, have helped our thriving seaside hamlet to evolve into a very pedestrian and bicycle friendly town. 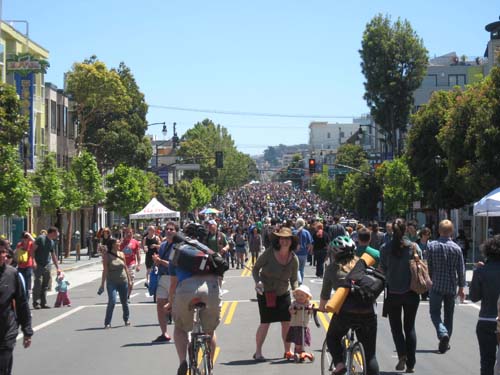 During a free lecture at the San Francisco Public Library, the former mayor of Bogotá Colombia, Enrique Peñalosa, explained that how we choose to design, plan and construct our urban environment greatly influences how we live, get around, behave and interact with each other. Peñalosa stated that the infrastructure choices our society makes not only hugely shape what we value, but how we function as people:

“A city speaks, a city creates behavior. We want people to be able to leave their cars at home. In Holland a political decision was made to support bicycle infrastructure. It is done little by little. In Japan 30% of people who arrive at a train station arrive by bike. To have a safe bicycle route is a right; governments have to take a risk, show leadership and do the uncomfortable thing to invest in the necessary infrastructure.

Bicycle use is a great symbol of equality. Someone on a $30 bike and a $30,000 car are equal in the street. A cyclist has as much right to use the road space as does a car. In developing countries 15-35% of people’s income is saved by those who travel by bicycle. In the future, bicycles will continue to become more and more important.

In 200 years people will say how could they live in those horrible 2010 cities? The 20th century will be remembered as disastrous for cities, as they were designed to accommodate cars, not people. “