Since the Supreme Court’s disastrous Citizens United decision, our nation’s democratic process has become so corrupted by unlimited corporate donations that it seems to be crumbling before our very eyes. Now that money is considered speech, and corporations are considered “people”, the voices of millions of citizens are being crushed by a handful of billionaire plutocrats and narrow big business interests. The corrupting influence of unrestricted campaign donations upon our elections was evidenced in yesterday’s elections in Wisconsin.

On her show last night, Rachel Maddow illustrated just how much unrestricted money was poured into the Wisconsin recall election. The union-busting Walker was able to exploit the unlimited campaign finance restrictions to amass $1,210,000 from only 41 individual contributors. This means that 25% of Walker’s individual donations came from just 0.00087% of his donors, the great majority of whom do not even live in his state. 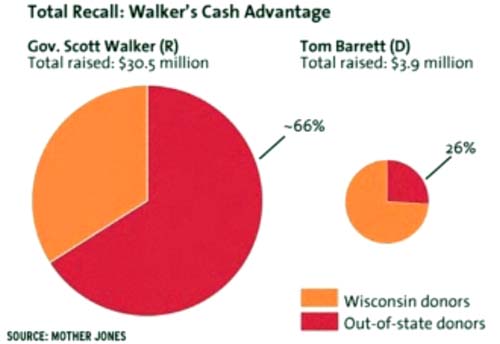 Considering that the Wisconsin Republican governor was able to rake in ten times the election money of his Democratic opponent, Mayor Tom Barrett, it is amazing that the recall race was still so close. Something has to change regarding campaign finance reform, or soon our nation will completely collapse into a severely stratified oligarchy, and all of our future elections will be determined by just a handful of billionaires.