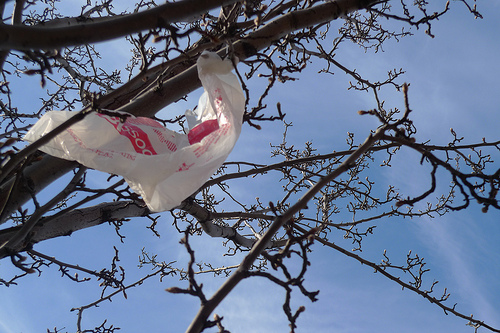 Salutary work by Los Angeles for finally banning  plastic bags! LA is now the largest of 49 California cities who have confirmed its commitment to protecting our environment. San Francisco initiated the process in 2007; the other notables cities being Santa Monica, San Jose, Long Beach, and many others.

Naturally, these existing municipal successes helped create the necessary support in Los Angeles to introduce regional reform. It took the “plastic-city” four years to convince nearly all of the local supervisors to vote (13-1) in favor of the ban.

Against the ban stood the employees of LA based companies who produce bags and feared losing their jobs. Also, the potential to cross-contaminate foods (like from raw meat juice) due to unwashed reusable bags created fear against the prohibition. The “convenience” of a plastic bag and the added hassle of remembering to carry reusable bags countered the idea as well.

The argument for the ban was based upon environmental concerns such as how these bags affect land, water and even air pollution.  The intention is to eliminate the environmental risks while  saving the waterways, wildlife, and landfills from centuries of pollution — a plastic bag takes an estimated five-hundred to a thousand years to disintegrate. Plastic bags pose a threat to animals that ingest them due to the  inability to distinguish bags from food (I have seen stray cattle on Delhi streets chewing on them).

These and other persuasive arguments – ranging from reducing oil-dependence to saving on trash collection and processing, to living more sustainably – finally won the day in Los Angeles City Council. 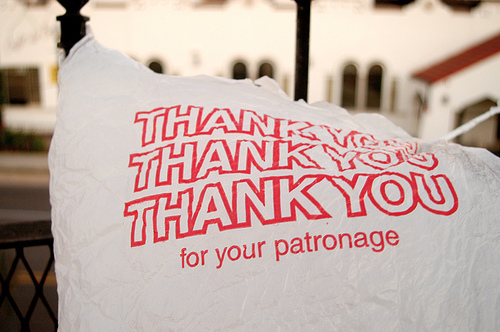 It's time to say "thank you and goodbye" to the plastic bag.

However, this change can’t happen overnight. Almost 750,000 grocery stores will participate in making this effort successful. The ban will be a phased process in which large grocery stores will have 6 months, and smaller ones will have a year for transitioning. At the end of one year, even the paper bag won’t be free: it will now cost ten cents.

The city will also conduct a four-month environmental review before implementing the law. To some, these concessions appear to dilute the legislation, but leaving paper-bags out of the ban was possibly an important compromise to make it possible at all.

As California’s largest city to finally get rid of plastic — the region is responsible for about 2.3 billion of California’s total consumption of 12 billion plastic bags — the ban is expected to spark state-wide legislation. Undoubtedly we are all pleased by this, for we would rather that our entire world was not engulfed by the expanding Great Pacific Garbage Patch.

Photos courtesy of Jonathan Youngblood and Cuttlefish via Flickr.com under Creative Commons License
Like us on facebook
Address: