Paul Krugman, the Nobel prize-winning economist and author of the new book, End This Depression Now!, spoke with Rachel Maddow about the direct correlation between expanding income inequality and the increasingly divisive political polarization present in the United States. The wealth disparity between the rich and poor has been historically shown to greatly increase just prior to a severe economic crisis, as it did before the Great Depression; and the wealth gap in our country has never been as extreme as it is right now. 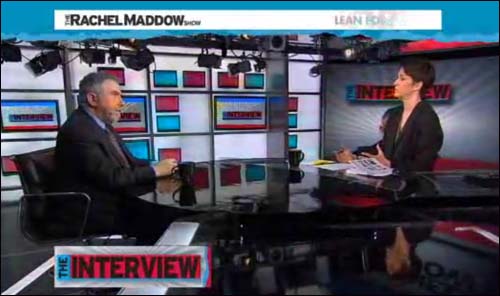 When the chasm between the very wealthy and everyone else grows larger, not only does our economy become more unstable, many of our elected officials  become more motivated to serve only the narrow interests of the elite, where the majority of their election donations originate. Maddow and Krugman analyze how growing income inequality not only portends economic catastrophes, it also negatively influences our government, and helps prevent reasonable legislative compromises from being made. 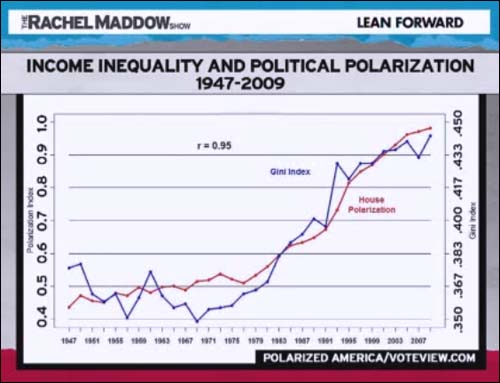 It is perhaps not  shocking news that the super rich have much more political influence than the rest of us. In his new book Krugman offers this insight into why the rising extreme wealth of the plutocracy also negatively impacts our nation’s democratic process:

“The gravitational political pull of the rich becomes stronger when the rich are richer…Since 1980…the Republican party has moved right in tandem with the rising incomes of the elite, and political compromise has become almost impossible.”