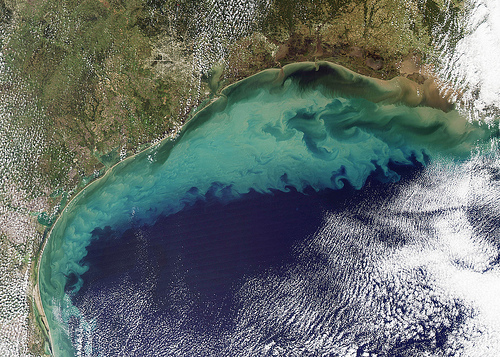 Oceanic dead zones are in the news again this week.  Several environmental groups have filed a lawsuit against the EPA because of their stance on waterway contamination and their enforcement (or lack thereof) on pollution limits. Pollution is the major cause of oceanic dead zones, which are characterized by hypoxic (oxygen deficient) waterways.  These hypoxic areas  are uninhabitable to most living organisms.

Although the devastating problems of dead zones are not new  — in fact these lifeless ocean areas have been increasing  worldwide at startling rates since the 1960’s — the EPA has consistently failed to stop contamination from infecting our waterways and oceans. Runoff from our roadways, agricultural lands and factories all contribute to the toxins that causes these dead zones.

In the following video NASA describes what dead zones are,  as well as how they form:

In an effort to halt the world-wide trend of increasing dead zones, the Gulf Restoration Network, the National Resources Defence Council and other groups have filed a lawsuit against the EPA, which states that the agency has violated the Clean Water Act by not setting pollution limits and enforcing standards which would address the growing problem of these dead zones.

The Clean Water Act clearly states that it is the Environmental Protection Agency’s responsibility to enforce our clean water law, but the organization has consistently proven itself to be inept, and has avoided any real action on this vital matter. The EPA even agrees that:

“…nutrient loadings to the Mississippi River and its tributaries are both harming upstream water quality and contributing significantly to hypoxia … in the Gulf of Mexico [at this time it] does not believe that the comprehensive use of federal rule making authority is the most effective or practical means of addressing these concerns….”

The EPA also does not give any evidence concerning why it is not able to set enforceable standards. Due to this inaction, currently the Clean Water Act is unenforceable and completely impotent in relation to this issue.

How Difficult is the Pollution Solution?

Solving these issues does not require rocket science, instead we simply need enforceable standards . Sustainable land use strategies and industrial pollution remedies that greatly reduce toxic runoff have been well-known for decades. These are primarily common sense prevention strategies, not high-tech solutions.

Please contact the EPA directly to let them know if you are concerned about the water quality of our national oceans and waterways. You can email or call to let them know that you are worried about agricultural runoff, industrial pollution and dead zones. Demand that they enforce our nation’s water protection laws.

Photo of Gulf by