Food insecurity is huge problem in our nation. More families are now in need of food stamps than ever before in the history of our country, and in many neighborhoods liquor stores far outnumber produce markets. However, in the barren food deserts of East Los Angeles, a few small oases of healthy food options are beginning to sprout. 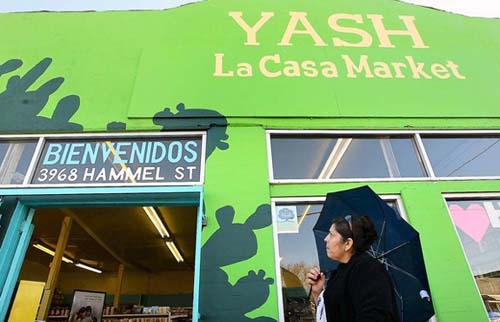 The first of four planned market makeovers is slowly helping to bring better access to fresh healthy food to the neighborhood. Yash La Casa Market on Hammel Street is the first corner store in the region to be transformed through a UCLA/USC public health program, which focuses upon neighborhoods that have traditionally lacked healthy food choices and access to fresh produce.

The targeted businesses receive assistance with diversifying their healthy food selections, as well as improving the physical interior and exterior of the stores. Beer signs are being removed from shop windows to let in more natural sunlight, and youth volunteers are helping to install gardens to show how simple it is to grow your own fruits and vegetables.

The Los Angeles Times reported on the different ways in which this program is attempting to impact the tremendous health disparities in these lower income and minority communities:

“East L.A. was targeted as part of a broader effort to reduce the risk of heart disease among Latinos, who make up 97% of the area’s population; 85% are of Mexican heritage.

Three years ago, the county Department of Public Health surveyed 1.3 million adults living in the department’s eastern district, which includes Boyle Heights and the unincorporated East Los Angeles, where Yash is. The agency found that more than 25% of those polled had been diagnosed with high cholesterol and 30% with hypertension, both often tied to obesity.”

A couple of years ago we wrote about the social enterprise organization Public Matters, which is working to tackle the complicated problem of how to sustainably transform some of our blighted food deserts in East Los Angeles. There are no easy fixes for these entrenched public health problems, but each local corner store that is transformed is another step toward a healthy food revolution.

image is by Christina House via the Los Angeles Times