Just when you thought the government was not going to continue to crawl up inside of your genitals, Governor Bob McDonnell has now signed legislation which requires the state to do just that. Virginia has now joined seven other states which mandate a medically unnecessary ultrasound before a woman is allowed to terminate her pregnancy. Twelve other states in the nation also have similar bills making their way through their legislature.

The depths to which Republicans are willing to sink in an attempt to control a woman’s body are appalling and repulsive, especially when considering right wing radical extremists like Rick Santorum, who want all birth control made illegal. Nothing says small government like being subjected to a mandatory transvaginal probe, or being denied access to basic medically necessary health care.

Cecile Richards, president of Planned Parenthood, explained that this new oppressive legislation is:

“…an appalling and offensive government overreach that is designed to shame women who are seeking legal healthcare.” 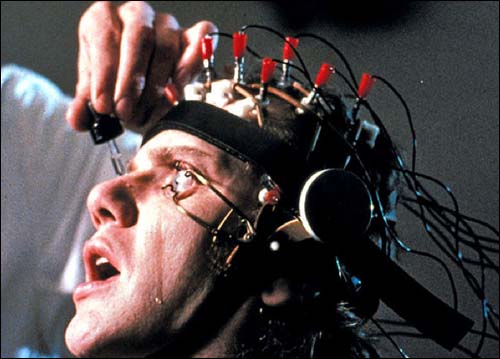 Unlike in the movie Clockwork Orange, the Virginia state government would not not physically force women to look at the generated image, but a copy of the ultrasound would be permanently placed in the individual’s medical records. Under the new law, women would also be required against their will to wait an additional 24 hours after the government mandated ultrasound before they are allowed to terminate their pregnancy.

Women may also be forced to pay for this medically unnecessary procedure as well. All of these factors only serve to place more financial, logistical and emotional burdens upon women in need of health care. Many critics of this new legislation have described it as “state-sponsored rape”.