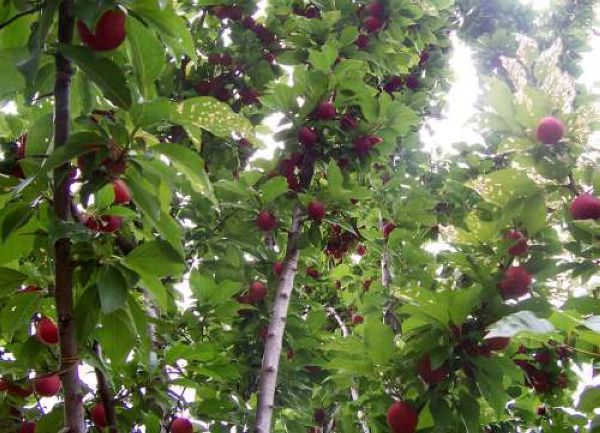 In the heart of Seattle, a public park is planned like no other — an urban food forest that is free for the plucking.

With its mild temperatures and moist climate, Seattle is taking advantage of its vegetation-friendly environment. A seven acre plot of public land, a community of local planners and advocates are moving forward with plans to build the first, completely free, public food forest in a U.S. city.

The proposed forest will be planted with hundreds of varieties of edible plants, herbs, berry bushes (such as honeyberries, mulberries and lingonberries) and fruit trees, including apple, persimmon, pear, plum and perhaps a few ‘exotics’ such as , yuzu citus . And all of it will be available free for the plucking to anyone who happens to walk through the soon-to-be-planted public forest in Seattle’s Beacon Hill neighborhood.

One other special feature of the proposed forest: it will be 100% organic — no genetically modified (GM) plants whatsoever.

The basic concept is perhaps inspired by two modern trends in urban agriculture: various urban harvest projects, in which seasonal fruit from city trees is collected and exchanged/distributed before it goes to waste on the streets, as well as permaculture, which seeks to develop perennial and sustainable agricultural plots that are more akin to wild/natural counterparts.

In a recent interview with the website takepart.com, lead landscape architect for the Beacon Food Forest project, Margaret Harrison stated:

“This is totally innovative, and has never been done before in a public park. The concept means we consider the soils, companion plants, insects, bugs — everything will be mutually beneficial to each other.”

The original idea for such an urban forest grew out of a permaculture design course group project. From there, it garnered even more momentum with the formation of a community-based organization called Friends of the Food Forest.

The organization then began a major public outreach campaign — mailing out thousands of postcards in five languages, posted fliers and promoted its idea at fairs and other local events. Key to the successful outreach was encouraging input from throughout the neighborhood.

There were initial concerns over who gets to pick the food, and how much edible fruit; for example, one person might pick or harvest for herself. Harrison and others concede that it is possible the one or two people could come along and harvest all the blueberries. But they note that perhaps such a person will have need of the berries, and, from the viewpoint of the planners, it would be far worse if any of the food went to waste. If all the fruit and berries were harvested, then in the eyes of the forest planners, this would be a complete success.

Author Comment – (erratum: no pineapple or guava will grown in the forest; see comments below) I have seen this coming for quite some time, and I am quite happy that suitable land was found and that the idea is coming to “fruition”. All in all, this represents a wise and wonderful trend in urban agriculture. The Beacon Food Forest will break ground this coming summer, 2012.